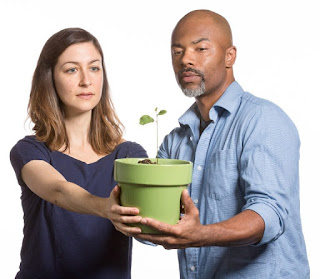 “Lungs,” a play by the young playwright Duncan Macmillan (whose “Constellations” was produced by B Street recently), may have been written with millennials in mind, but it has appeal for all ages.
It follows the lives of M and W (no names are given) through the rocky eras of their lives, an odd love story, but fascinating, in its many twists and turns.

Directed by Lyndsay Burch, this two-person, 100-plus-minute piece features the talents of the amazing Jahi Kearse as M and Dana Brooke as W.

The set by Samantha Reno pictures an amorphous outdoor scene. While the script calls for no set at all, the designer wanted to create an environment that could represent both inside and outside and “the circle of life.” Also, as questions of threats to the environment loom large in this work, this seemed appropriate.

As the action begins, the couple are in line at IKEA when M decides to broach the subject of whether this might be the time to start thinking of having a family. This takes W by surprise and she starts one of her many diatribes about the ethical issues of raising a child in an age where there is political unrest, where climate change is a major issue, and if you really care about the planet, even if you are a “good” person, is it right to have a child? Particularly when the carbon footprint of that infant will be 10,000 tons of CO2?

“That’s the weight of the Eiffel Tower. I’d be giving birth to the Eiffel Tower,” W wails.
On the other hand, maybe this child will be the one who makes major contributions to all of these problems.

But what about the in-laws, who are none too happy with the whole relationship in the first place? The discussion goes back and forth, agonizing over wanting a baby and worrying about if this is the right time — or if there will ever be a right time.

Both very funny, and then very poignant, these issues are at the heart of this play. The characters are maddening and lovable by turns, each with his or her own flaws, but always, no matter what happens, deeply in love with each other.

W is the more high-strung of the pair, while M is more laid-back, a good man desperately trying to figure out what he can do to make things better for the woman he loves, but not really understanding what she is saying most of the time (a situation any woman can relate to!).

The dialog would put the wordy David Mamet to shame, as it is smart, rapid-fire with impeccable comic and dramatic timing, which works only because of the talent of the two actors. Sometimes the monologues of one or the other of them leaves the audience breathless trying to keep up.

This is a moving, funny, always engrossing play raised to new heights by the talents of two actors. When Macmillan wrote this he was only 30 years old. One wonders what a career he has ahead of him.
Posted by Bev Sykes at 4:02 PM