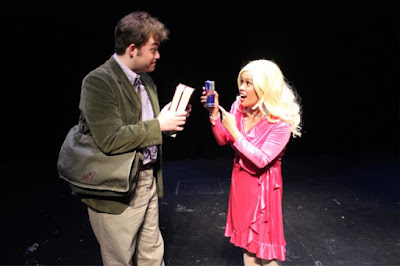 Omigod, you guys! Elle Woods has finally come to the Davis Musical Theatre Company, under the direction of Jan Isaacson.

“Legally Blonde” (music and lyrics by Laurence O’Keefe and Nell Benjamin and book by Heather Hach) is as light and frothy as cotton candy — and just as pink. It has all the story of the movie with Reese Witherspoon, but without the depth. The scenes are so short (nine in the first act, eight in the second) that there is little time to get a feeling for the characters.

The songs aren’t memorable (except for the opening and recurring “Omigod, you guys”), but the cast is so enthusiastic and the dancing so infectious that you find yourself enjoying it in spite of yourself.
The story follows sorority diva Elle Woods, who came to the university to catch her man and discovers that she was only a chapter in his life. He’s going to become a famous attorney and politician and she … well … she just doesn’t fit into his view of a politician’s wife.

As he goes off to Harvard, flighty Elle does the only logical thing … she studies hard, for the first time in her life, and gets into Harvard Law too, thinking that, given time, she can win him back.
Her parents (Steve Isaacson and Dannette Vassar) are aghast. “You could have a film career out here,” her father protests. “There’s no movie studio there and the girls all have different noses.”

It’s a silly plot, but we get to watch Elle begin to think about things seriously and ultimately have more respect for herself than to want someone like the guy who ditched her.

Ernestine Balisi is the bleach-blonde, pink-clad Elle, with Mac playing her constant companion Bruiser, the Chihuahua. Last seen as Peggy Sawyer in “42nd Street,” Balisi brings the same energy and sparkle to the role of Elle. She and Bruiser work well together and neither had a misstep throughout.

Boyfriend Warner Huntington III (Jonathan Kalinen) is a real loser (to quote a current political figure) and Kalinen brings out all the worst in him until we don’t want Elle to get her man anyway!
Adriel Cruz is Professor Callahan, the womanizing hot-shot instructor who sets his sights on Elle. Cruz gave a subdued performance throughout Act 1 and it was difficult not only to understand him, but to find him all that menacing until he sings the very dark “Blood in the Water.” His performance improved in Act 2.

Mitchell Worrell-Olson is Emmett, Callahan’s teaching assistant, who takes Elle under his wing with a friendship that may grow into something deeper, as he helps her with her studies along with a study group that includes Erynn Kinch as the dark and brooding brainiac Enid.

Ashley Marie Holm makes a wonderful impression as Paulette, the cosmetician who becomes Elle’s friend, as the two of them support each other. Paulette dreams of marrying an Irishman and settling down in the suburbs (she sings the beautiful song “Ireland”). Then along comes the UPS man Kyle (Matthew Evans) to set her heart a-flutter.

Longtime Davisites may know the story of UPS delivery man Tim Spencer, for whom a downtown Davis alley is named. Evans is the epitome of Tim Spencer, in his macho-ness and his short shorts.
A real scene-stealer is Paulette’s dog, Rufus (played by Savannah), a bulldog missing teeth on one side of her mouth, leaving her tongue hanging out all the time. She was definitely a crowd-pleaser.

Rachael Sherman-Shockley plays the bitchy Vivienne with venom. Because the character changes as the show progresses, Sherman-Shockley gave a multi-layered performance and displayed a beautiful voice on “Legally Blonde Remix.”

Morgan Bartoe is Brooke Wyndham, on trial for killing her husband, defended by Callahan and his students. Brooke is an exercise guru and her exercise routine “Whipped into Shape” done with a chorus of women, each with jump ropes, is a highlight of the show. How they sing and jump and still have breath left at the end of the number is a marvel. (Choreography is by Terri Taylor.)

There is a Greek chorus of sorts, made up of Elle’s sorority sisters — Serena (Joelle La Guerra), Margot (McKinley Carlisle) and Pilar (Julia Hixon) — who become Elle’s cheering section.

The message of this musical is to be yourself and that you can be better than you think you are. And along the way, don’t forget to dress in pink!
Posted by Bev Sykes at 12:01 PM