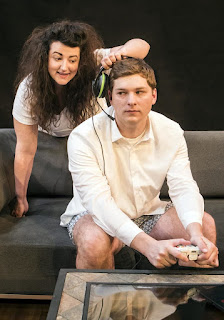 Over the years, I have seen actress Tara Sissom in many comedies and have long admired her talent for comedy. However, in Capital Stage’s production of “Bad Jews” by Joshua Harmon we see an entirely different side of Sissom. She is funny, yes, but also angry, poignant — and amazing. She dominates as Daphna, one of the grandchildren of “Poppy,” who has just died.

The four-actor play takes place in a cramped New York apartment where three grandchildren have gathered the day after the funeral of their grandfather, the lone family holocaust survivor. The stated plot concerns which of the three will get Poppy’s “chai,” a gold pendant signifying “life.”

It was given to him by his father, and while a prisoner in Auschwitz he hid it in his mouth for two years until liberation. When he had no money for an engagement ring, he gave it to his soon-to-be wife as a symbol of his love. After he was able to buy a ring, he wore it around his neck for the rest of his life, so this has tremendous meaning for his family.

Daphna is certain that he meant for her to have it after his death. Mild-mannered Jonah (Noah Thompson) doesn’t care and just doesn’t want to discuss it. But cousin Liam (Jeremy Kahn) — who missed the funeral because he was skiing in Aspen and whose mother fed-exed him the chai as his grandfather lay dying — feels it rightfully belongs to him.

There is longstanding enmity between Liam and Daphna and they can hardly stand to be in the same room together. Daphna feels that Liam is really a self-hating Jew who chooses “tapid little Bambi” creatures out of insecurity, since with them he can be arrogant and masculine.

As for Liam, “She is horrifying. Just listen to her. Every other word that comes out of her mouth is some unbelievably offensive insult that we’re supposed to pretend not to hear?”

Things explode when Liam (a self-described “bad Jew”) arrives with his Delaware-born girlfriend Melody (Chloe King). He intends to continue the family tradition and give the chai to her in lieu of an engagement ring.

Though the argument over ownership of the chai is volatile, it unearths a lot of long-held feelings about religion, family and tradition. For Daphna, the chai symbolizes the survival of the Jewish faith and to give it to a gentile is unthinkable.

But as this is basically a comedy, there are some very funny moments in it, like remembering when Poppy took them all to Benihana and everyone was struck with bowel problems. The memory brings the three cousins together literally rolling on the floor in laughter.

But then things that seem very innocent (Daphna asking Melody about her background, growing up in Delaware) suddenly turn ugly when she accuses Melody’s family of the genocide of the Native Americans.

Director Amy Resnick has kept the delicate balance between funny and serious so that you’re never quite sure which you are seeing.

But Sissom is a wonder and Kahn, a newcomer to Capital Stage, is a worthy match for her diatribes.
King’s Melody is innocent and totally ignorant of the seriousness and importance of Jewish history (“I don’t see why any of it matters, you know? Where people come from? People are just people.”) which further inflames Daphna, the rabbinical student and uber Jew whose dream is to go to Israel and join the army.

As Jonah, Thompson spends most of the play cringing, hiding and saying he does not want to be involved in the argument — though in the end it is he who has the biggest impact on everyone, on and off the stage.

This is a unique piece of theater, which ends Capital Stage’s “Love and War” season. It is perhaps my favorite of the six plays in the series of excellent pays. Capital Stage just keeps getting better and better.