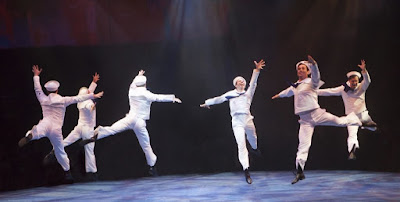 After seeing Davis Shakespeare Ensemble’s superb “Wonderful Town” and Music Circus’ sparkling “On the Town” — both by the team of Betty Comden, Adolph Green and Leonard Bernstein and both paens to the Big Apple — I have a strong craving for a slice of New York pizza.

The energetic “On the Town” burst onto the Music Circus stage this week, the 1944 musical as fresh as it was when it first opened on Broadway. The show opens with a lament (“I feel like I”m not out of bed yet”) by a workman (Joseph Torello) whose voice is clear and deep and wonderful. He appears as several other announcers throughout the show.

This is the story of three sailors on a 24-hour leave in New York City. It is the first time each of them has visited the city and they are determined to see everything and maybe pick up a lady along the way.

Chip (Matt Loehr) has a tour book his father used many years ago … and he’s determined not to miss anything. Gabey (Sam Lips) falls in love with a picture of “Miss Turnstyle” that he sees on the subway and is determined to find her. Ozzie (Clyde Alves) just wants to find a date because Manhattan women are “the prettiest in the world.”

The trio decide to split up and see if they can find Miss Turnstyle (real name Ivy Smith, played by Courtney Iventosch). They agree to meet up back in Times Square at the end of the afternoon.
Gabey steals the poster off the subway and is pursued through the rest of the show by an umbrella-waving little old lady (Karen Hyland) and a growing posse of police and others.

Chip is accosted by taxi driver Hildy Esterhazy (Jennifer Cody), who has just been fired from her job. She is a real firecracker, oversexed and determined to get back to her apartment for a little canoodling. Cody is marvelous and brings a real spark to every scene in which she appears.

Ozzie heads to the Museum of Modern Art, because he believes beautiful women love art. There he finds anthropologist Claire de Loone (really) played by Holly Ann Butler, who mistakes Ozzie for a prehistoric man. She is engaged to a famous judge, Pitkin W. Bridgework (Donald Corren), who has encouraged her anthropological studies as a way to sublimate her sexual addiction. He is very understanding when he sees her with another man because he knows it is just scientific investigation.

Gabey goes to Carnegie Hall, where the subway poster says Ivy studies, and he actually finds her, but is hustled out by her teacher, the tipsy Madame Maude P. Dilly (Susan Cella), who wants Ivy to keep her job as a cootchie dancer because it pays her bills for vocal instruction.

Through a parade of increasingly sleazy nightclubs, the group ends up on Coney Island, where Gabey finds Ivy again and all end up back on the dock, where we began. As our three heroes say sad goodbyes to the girls before boarding their ship, three fresh new sailors descend for their own adventure in New York! New York!

Original costumes for this dazzling production were by Jess Goldstein, with Music Circus designer Marcy Froehlich. They are wonderfully, colorfully ’40s, down to the seams in the stockings.
Choreography is by Mark Esposito and includes a dream ballet, an effect that would be used even more effectively a year later by Rodgers and Hammerstein in their “Carousel.”

Labels: Music Circus, On the Town