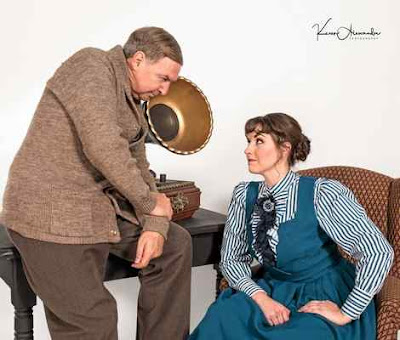 “My Fair Lady” has been called “the perfect musical.” The Alan Jay Lerner/Frederick Loewe musical version of George Bernard Shaw’s “Pygmalion” opened on Broadway in 1956 and set the record for the longest run on Broadway up to that time.

It was followed by a hit London production, a popular film version and numerous revivals. It has won countless awards for the show itself and for many of the performers.

Over its 60-plus-year history, “My Fair Lady” has been a staple of community theaters around the world.

The Woodland Opera House production, which opened last week under the direction of Andrea St. Clair (who also choreographs), can add its name to the list of outstanding versions of this theater classic. With an exceptional cast, amazing costumes by Denise Miles, and a skeleton, but competent six-piece orchestra directed by Lori Jarvey, this show is a definite audience-pleaser.

Over the years, I have seen Rodger McDonald play numerous roles and have the impression there is nothing he can’t do well. Henry Higgins is certainly a role that seems made for him. He’s no Rex Harrison, of course, but as the stern taskmaster who takes the cockney flower girl under his wing, intending to turn her into a “princess,” he’s excellent.

In the light-hearted moments (like “The Rain in Spain”) it’s fun to see Professor Higgins let down his hair, and his “I’ve Grown Accustomed to Her Face” will break your heart.

David Cross is solid as Higgins’ colleague, Col. Pickering, who agrees to pay for Eliza’s lessons as part of a bet between himself and Higgins. Pickering is the man who makes Eliza realize how a lady should be treated.

Jori Gonzales, as Eliza Doolittle, is simply loverly. I loved watching not only her cockney and her “lady” but also the midway point, which took perhaps more acting.

Her best acting may be in the scene where she says nothing at all. As Higgins, his staff, and Col. Pickering are dancing and celebrating the triumph of the ball, totally ignoring Eliza, the look on her face was poignant and heartbreaking.

But stopping the show — twice — is the bombastic Brian McCann, as Eliza’s profligate father, Alfred P. Doolittle. He brings down the house in both acts, with “With a Little Bit of Luck” and “Get Me to the Church on Time.”

Freddy Eynsford-Hill is a thankless role. He’s a lovelorn nebbish whose real job is to serve as distraction while the crew is changing the set. However, Alex Grambow has a beautiful voice and is so hopelessly in love with Eliza that you can’t help but love him.

Charlotte French has not been seen on the local stage in a long time and even in the small role of Mrs. Higgins, she reminds us of what a force she has always been. Her “Bravo, Eliza” was a short line but definitely memorable.

There are wonderful moments throughout the show, but everyone’s favorite is always at the Ascot races. The costumes are fabulous and the hats alone are worth the price of admission.

The production is a real winner for the Woodland Opera House and if you have never seen it — or haven’t seen it in a long time — by all means get tickets and give yourself a real treat.