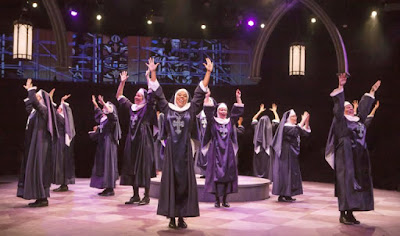 As a product of 12 years of Catholic school, all taught by nuns in habits, it did my recovering Catholic soul proud to see habited nuns singing and cavorting on stage.

“Sister Act,” with music by Alan Menken, brings to an end the successful 2017 Music Circus season, and director Glenn Casale pulled out all the stops to guarantee that patrons will leave the Wells Fargo Pavilion in good spirits and eager for the 2018 season to begin.

The musical is based on the 1992 film, starring Whoopi Goldberg, but it takes it over the top, losing the more personal, poignant pieces of the story — so flashy it’s like the nuns had moved from a low-income parish to the Vegas stage.

I did miss the heart of the movie, but you can’t help but love the glitz and the glitter. (Heck, even the pope loved it.) This is not to say it is without poignancy — just not in the same way that the smaller movie showed.

Zonya Love, who appeared as Celie in the original Broadway production of “The Color Purple,” is Deloris Van Cartier, a lounge singer whose career is going nowhere, who accidentally witnesses her criminal boyfriend Curtis (Rufus Bonds Jr.) commit a murder. Her life is in danger and she runs to the police to ask for protection.

Bonds is tall and menacing and you don’t want to mess with him.

Alan Wiggins is Eddie, an old school friend of Deloris, now a police officer who decides to hide Deloris in a local convent.

Wiggins is outstanding as the guy who has been in love with Deloris for most of his life. His poignant “I Could Be That Guy” built and built until it was a full-fledged stage number with the most incredible costume change of the night.

Love is extraordinary, a square peg trying (not very hard) to fit into a rigid round hole, but ultimately finding her place among the other sisters. She has a voice that will knock your socks off. And her costume for the finale is spectacular!

Lynne Wintersteller plays the Mother Superior, an old-school nun determined not to let the temptations of the world reach inside her convent. (You can imagine she was one of those ruler-carrying teachers in her day!) Wintersteller played this role in the show’s first national tour. Her anguished “I Haven’t Got a Prayer,” trying to ask God for guidance, was a stand-out.

Mother Superior assigns Deloris the task of helping with the convent choir which, under the direction of Mary Lazarus (Audrie Neenan), can barely hit a note that is not sour and is part of the reason why the church is about to be foreclosed. Neenan originated this role on Broadway, so it’s no surprise that she has perfected it.

Jeanna de Waal plays the postulant, Mary Robert, a mousy thing afraid to speak or sing out, whose life is completely transformed by her experiences in the choir.

Nikki Switzer is Mary Patrick, whose role is sadly not nearly as big as in the movie, and I missed that since she was one of my favorite characters. But Switzer is big and enthusiastic and you love her anyway.

Under the direction of Sister Mary Clarence (the name Mother Superior gives to Deloris), the choir is transformed into a show choir, going from black habits to black habits with sequins, and then white with sparkles lining the flowing robes.

They sing, they dance, they raise their arms to God as they sing “Take Me to Heaven” and “Sister Act.” Simple church songs become big glitzy show stoppers, but also the Donna Summer-like number at the beginning becomes a religious hymn by the end.

(This is where I had trouble with the show, it being too over-the-top and un-nun-like for me, but as an audience-pleaser, you could not ask for better!)

This has been a strong season for Music Circus and each show seems to be better than the last. “Sister Act” is definitely a crowd-pleaser.
Posted by Bev Sykes at 1:48 AM