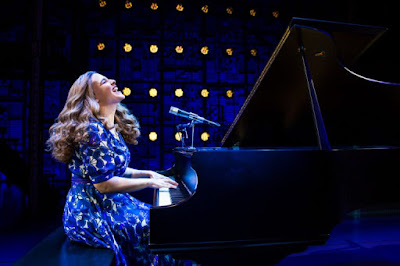 It was the late ’50s and rock and roll was in its heyday. Nobody had heard of The Beatles yet. A perky young girl named Carole Klein, whose mother wanted her to become a teacher, was passionate about writing songs and determined to sell one of her songs to Don Kirshner, of the Aldon Music publishing company.

The song sold and the career of Carole King (as she changed her name) was born.

“Beautiful — The Carole King Musical” tells the story of King’s career and her music in a manner similar to the wildly popular “Jersey Boys.” It’s mostly music from the ’50s and ’60s, familiar to many of the gray-hairs in the audience: “Will You Love Me Tomorrow” “Up on the Roof,” “One Fine Day,” etc. There’s just enough dialog to trace King’s story, but not enough to fill in the story gaps before the next song or song snippet starts.

To watch this musical and see the activity around the studio, you’d think that writing music and getting published was a piece o’cake, as the songs flow instantly and are immediately grabbed up to be recorded by one of the popular groups of the day, one even sung by King’s babysitter, Little Eva (Alexis Tidwell).

Sarah Bockel is a perky, upbeat Carole, madly in love with Gerry Goffin (Andrew Brewer), her husband and writing partner of many years. Together they produced several top hits of the 1960s, and two babies. In her heart, she really wanted the normalcy of suburbia with a husband and kids, which her husband begins to find stifling and boring.

When Goffin begins showing mental instability and infidelity and using drugs, the marriage falls apart and Carole is a single mother, on her own. But she’ll not count herself out.

“The girls deserve better,” she says, “…and so do I!” which brings a loud cheer from the audience.
Reluctantly, she agrees to do some live performances, and discovers that she’s good at it — and the performing career of Carole King is born. The show ends where it starts, at a grand piano on the stage at Carnegie Hall, with the release of King’s first album, “Tapestry.”

A parallel subplot concerns the hypochondriac but humorous Barry Mann (Jacob Heimer) and the feminist Cynthia Weil (Sarah Goeke), a competitive writing team (producing such songs as “You’ve Lost that Lovin’ Feeling”) who end up being their best friends. It takes years for Mann to convince Weil that marriage is not such a bad idea.

James Clow as Don Kirshner is always pushing both writing teams to do their best, but is understanding and supportive when problems arrive.

A fun bonus of this show are the familiar names from the ’60s: Neil Sedaka (John Michael Dias), The Drifters, The Shirelles and The Righteous Brothers — who must have studied videos of their respective groups, their look and sound is so similar to the original groups. (The Shirelles have an amazing costume change which will leave you agog.)

This show is a salute to female empowerment and how one woman can rise from the ashes of a painful relationship to the top of the charts, as she sings the powerful “You Make Me Feel Like a Natural Woman.”