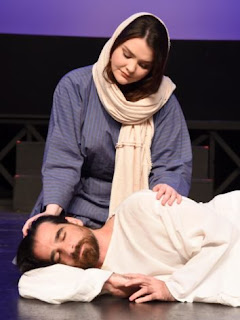 The story is loosely based on the last week of Jesus’ life from just before the triumphant entry into Jerusalem and ending at the crucifixion. The story centers on the conflict between Jesus and Judas Iscariot, a story that is not told in the Bible.

You could not ask for a more authentic-looking Jesus than Nick Thompson (who played Judas in the 2009 production). You almost expected people in the audience to ask for his blessing.

But this is a stern, serious Jesus with little of the charisma that would show us why crowds were drawn to him. While he does not seem to have much of a change in mood, he’s at his best expressing his anguish at his upcoming suffering in the song “Gethsemane.”

Eddie Voyce is a marvelous Judas, tormented by “tormenters” Michele Stark-Burnett and Monica Parisi wherever he goes. Judas is increasingly upset that Jesus is starting to believe his own press and is getting too big for his toga.

Judas sees money spent unnecessarily that could go to the poor. He’s so upset that he goes to the Roman elite to turn Jesus in, but wants to be sure they know it’s for the best of all possible reasons:

“It’s taken me some time to work out what to do.
I weighed the whole thing out before I came to you.”

His anguish at being forced to sell his former friend for 30 pieces of silver is palpable.

A break-out performance in this production is Pablo Frias as Caiaphas. Though this is Frias’ first musical theater production, his booming basso voice and commanding presence make him the focus of any scene in which he appears.

Likewise, the old pro Gil Sebastian fully inhabits the character of Pontius Pilate, who tries so hard to get Jesus to talk, and who wants desperately to find a way to keep him from being put to death.

Rachael Sherman-Shockley, who made such an impression as Dr. Jekyll’s virtuous fiancée in “Dr. Jekyll and Mr. Hyde,” goes in the other direction, playing the woman of easy virtue, Mary Magdalene, who doesn’t know what to make of her attraction to this Jesus.

“I don’t see why he moves me
He’s a man. He’s just a man
And I’ve had so many men before
In very many ways
He’s just one more”

Her “I Don’t Know How to Love Him” may be the best-known of the songs from this opera and she gives it all the intensity that it needs.

Comic relief from the more serous action is offered by Quintin Casi as King Herod, dressed as a modern-day lounge singer, with scantily clad Charleston-dancing girls as back-up. It was a favorite moment in the show.

In lesser roles, Kara Wall shines as Annas; Leah Frazier, with the Anne Burrell Hair, is a strong Simon Zealotes; while Timothy Dimal gives a credible performance as Peter and Richard Kleeberg does double duty as both a priest and a Roman soldier.

The ensemble — from their opening “What’s the Buzz,” through the Palm Sunday “Hosanna,” to the “Crucifixion” finale — are all wonderful, whether apostles, followers or sick people looking for a miracle cure. Pamela Kay Lourentzos has done a marvelous job of choreography.

There are no sets to speak of, other than a few platforms on the otherwise bare stage. In fact, the only “set” piece is the crucifix at the end. The show does not demand a set but lighting designer Isaacson has created some inventive lighting designs.

DMTC once again has done Steve Isaacson proud with this latest production of “Jesus Christ Superstar.”
Posted by Bev Sykes at 11:42 AM