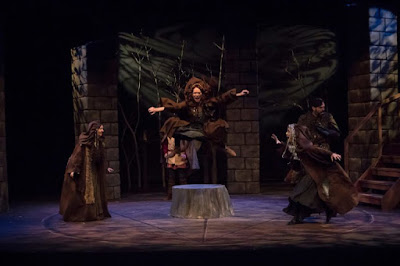 Something wicked this way comes, and it comes with goddesses chanting, and lots of drums playing ominously.

The play is Shakespeare’s “Macbeth,” (or “The Scottish Play” as superstitious thespians prefer to call it, fearing that speaking the actual name will bring bad luck), now at the Sacramento Theatre Company.

This version, set in 11th-century Scotland, is directed by Casey McClellan and is inspired by paganism and ancient ritual. The three witches, for example (Janet Motenko, Ruby Sketchley and Monique Lonergan), represent the Triple Goddess: the Maiden, the Mother and the Crone. They serve Hecate, the goddess of witchcraft and magic (Carissa Meagher).

This is a less-bloody-than-usual version of the classic, relying instead on the believability of the emotions of the characters than on the visual examples of the atrocities occurring, for the most part, off stage. (The “bloodiest” character wears red, but does not drip blood, as in some versions I have seen.)

With his tall stature and dark, searing eyes, William Elsman is unmistakably Macbeth, a man driven by ambition, who does terrible things to achieve his goals, but he is a man who is unable to bear the psychological consequences of his actions, and is constantly tormented with guilt. His later descent into madness as his power-hungry killing spree begins to weigh heavily on his soul was decidedly believable.

A worthy companion is Atim Udoffia as Lady Macbeth, who is smart, ambitious, brave and ruthless. Her passion for her husband is as strong as her passion for helping him become king. Her anguish over the murder of Duncan, a murder she precipitates, prevents her from sleeping soundly and her famous soliloquy while sleepwalking reveals how much their actions are weighing on her. Unlike her husband, she is eventually overwhelmed by her guilt and commits suicide.

Ian Hopps gives an intense performance as Macduff, the thane of Fife, who discovers the murder of the King, particularly when he learns of his family’s murder. It is he who ultimately kills Macbeth, yet acts not out of revenge, but to save Scotland from destruction.

Meagher returns as Lady Macduff, on stage just long enough to get murdered in a revenge killing.

Special note should be made of sixth-grader Sebi Fernandez, in his first year of STC’s Young Professionals Conservatory, for his performance as Fleance, son of Macduff, who suffers one of the best on-stage deaths I have seen in a long time. (Fernandez alternates in the role with Dakoda Jones.)

Macbeth’s buddy and companion is Banquo (Michael Jenkinson). When the witches prophesy that his children will one day be the kings of Scotland, it is enough to send Macbeth into a jealous rage and kill his friend, only to be haunted by his ghost as he begins his descent into madness.

As this play progresses, it is inevitable that comparisons will be made between the catastrophe that is the Macbeth reign and the current problems in our own country — in fact, situations are so similar in places that they evoked laughter in the audience. At least here (so far) the problems are not solved by murder.

Sacramento Theatre Company has given us a not-surprising excellent production, continuing its commitment to bringing Shakespeare to a new generation of theatergoers.
Posted by Bev Sykes at 9:54 AM