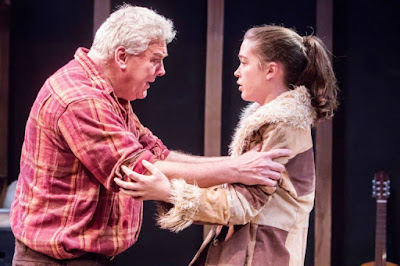 It’s a riveting opening. The lights come up and at first there is silence, then the theater door slams open and an epithet is uttered as a woman moves slowly across the floor to the stage dragging a blood-stained heavy bag. More epithets follow as she continues to drag the bag slowly up the stairs and onto the stage, the room of what appears to be a dilapidated unfurnished house.

Dragging the bag across the floor she begins chopping at the floor with an axe, picking up three boards, leaving a hole into which she pushes the bag. More epithets.

“The Arsonists,” now at Capital Stage, under the direction of Gail Dartez is a 70-minute one-act play by Jacqueline Goldfinger, set in a North Florida swamp. Scenic and lighting design are by Brian Harrower, and are as essential to the story as are the two actors. The finale, in particular, is spectacular.

The inspiration for this play came from the playwright watching her own father struggle with health issues shortly after she herself gave birth. In an interview, she explains that “The Arsonists” grew from a more intimate personal place of having just given birth, and intense, sometimes deeply disturbing connections to her children, which made her reflect on Sophocles’ “Electra” and the relationship between Agamemnon and Electra as more intense than ever before.

“This is a love letter to my father. He is not dead. It’s a shame that folks hold off ’til somebody dies to say how much they mean to ’em. I’m gonna go ahead and do it now.”

The two characters are M (Megan Wicks) and H (Rich Hebert). H is M’s father and he refers to her as “Littles” throughout the play. We learn early on that the two are arsonists for hire. They are a family of traditional values and honor and hold onto the traditions that have been passed down through the family. But their last job has not gone well.

M has lived in the swamp all of her life, has never had the opportunity for socialization and her father is her whole world. She’s a tough cookie, but will soon be on her own. Her father, realizing that and knowing that he must leave her, wants to help her find a way to face the future alone.

The characters love to sing together and, though neither of the actors is a musician, they learned to play the guitar and sing traditional folk songs, thanks to the help of Davis’ own Sam Misner (of Misner & Smith), who is the music director.

This is not a “musical,” but they sing, strum or hum traditional tunes as they are doing something else. The music draws them together, never more beautifully than in “Poor Wayfaring Stranger,” the song they sing sotto voce while braiding twine for fuses.

This is not a “wordy” play, but each bit of dialogue is pure gold. In describing his relationship with M’s late mother, H says, “I’m not talking about sex. It’s more intimate. A release, from yourself to yourself. That takes someone else’s love to ignite. Otherwise you burn cold, no air, no breath, to feed the flames, get you alive.”

One wonders how this play can ultimately end but Goldfinger has written a spot-on resolution — and Harrower brings it to life.

Capital Stage is one of four theaters in the country that’s debuting “The Arsonists” as part of the National New Play Network’s rolling world premiere program.
Posted by Bev Sykes at 11:14 AM