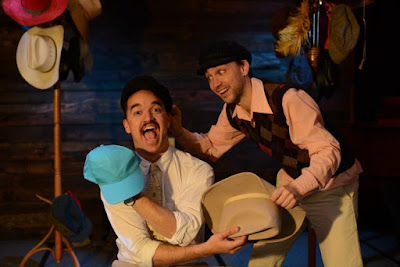 There’s a new sheriff in town. Or at least a new theater company. Bike City Theatre Company is a promising new group, whose goal is to bring new works — dramatic and comedic, as well as improv and sketch comedy — to Davis.

The first production, “Gutenberg! The Musical!” is a zany comedy that definitely delivers on the promise to bring comedic works to Davis.

“Gutenberg!” is a musical written by Scott Brown and Anthony King. Brown and King developed the show at the Upright Citizens Brigade Theatre in New York City, where it ran for more than a year, then transferred to The Actors’ Playhouse on Jan. 16, 2007. The production closed on May 6, 2007. It was nominated for four awards for book and music.

Bike City is not your usual company, as one discovers upon picking up tickets, where you learn that in keeping with their philosophy of saving the environment, there are no printed programs available. Either print your own from their website before coming to the theater, or you scan the QR code on the wall of the theater to get the program on your cell phone.

There are also no real “sets,” but milk cartons and cardboard covered with newsprint to serve as guidelines. Scenographer Heidi Voekler gets high marks for creativity. There is no credit given for costumes, but whoever chose Kevin Gish’s tie was inspired.

Bike City has no home theater, so this show is being performed in several locations. We saw it at Root of Happiness Kava Bar. Other locations are Sudwerk and Super Owl breweries, Watermelon Music and the Pence Gallery. The idea is to bring theater to people who might not otherwise go to theater, explained Artistic Director J.R. Yancher.

“Gutenberg! The Musical!” is a 90-minute, two-person comedy and features Doug (Gish) and Bud (Kyle Stoner) as enthusiastic playwrights who have written a musical about the inventor of the printing press. We, the audience, have been invited to a backer’s audition, where the playwrights are looking for funding to bring the show to Broadway.

Gish and Stoner are two actors with excellent dentition (one can’t help but notice when sitting in the front row, inches from the stage!) who have seemingly inexhaustible energy as they race through the story, playing some 20-plus different characters (each with his or her own unique hat, labeled to avoid confusion). The playwrights admit that their extensive Google search yielded little information on Johannes Gutenberg, so this play is made from alternative facts.

Gutenberg lives in the fictitious town of Schlimmer, Germany and is a vintner who can’t seem to make a living plying his trade. He notices that nobody in the town can read and this is causing problems, such as the death of a baby (“dead baby” is one of the characters) because his mother gave him jelly beans instead of medicine because she couldn’t read the label (“Jelly beans, not medicine/If only I could read,” she sings).

The music in this show is fun and catchy, but totally forgettable. We didn’t go home humming “Gutenberg/darn tootin’-berg/he’s the best chap around sure as shootin’-berg” or the beef-fat trimmer’s song, “The sun it rises in the east/I smell bread rising with the yeast” — but we loved hearing them.

Gutenberg’s assistant is the lovely Helvetica, who spends her time stomping grapes and pining away for the love of her boss. Gutenberg has an epiphany and decides to convert his grape press into a printing press and help the town become literate. But will the evil “monk” — who does not want the people to read, so he can interpret the Biblical word of God to be anything he wants it to be — succeed in destroying the printing press?

There is so much cleverness in this comedy. For example, when there is a meeting in the town square, the two men don all of the hats and, as they speak out as one character or the other, toss the top hat aside and become the next character. There is also a dance number that features a kick line of five dancers, which must be seen to be believed.

This show is just fun from start to finish — and may be a once-in-a-lifetime experience if the theater company finds its own stage. For the time being, being “homeless and wandering” doesn’t seem to have any adverse effect on this talented company at all.

You will have to go to the Bike City Theatre website to get information about venues and tickets. But, trust me, you won’t be sorry.
Posted by Bev Sykes at 2:09 PM

Hi everybody.
I love music. Music brings us interesting things. Interested in music I would like to mention ringtones. Ringtones from famous songs. Hot ringtones. Ringtones are attractive. You can search through my ringtone to get the best ringtone for your mobile phone at my homepage: https://ringtonesmobile.net/

Free ringtones for people around the world. Hope my ringtone will please you. I need your comment to improve the ringtone better. Thank you for your attention!