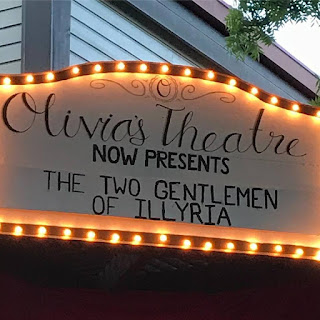 The enthusiastic crew of Acme Theatre Company are once again giving their yearly gift to the city of Davis in thanks for all the support they receive from everyone throughout the year.  Each year the actors perform a comedy on the outdoor Art Center stage.  The audience is invited to pack a picnic and sit on the grass to enjoy the show (and if it’s too, cold blankets are available to rent and you can even buy socks!)


This year’s play is Shakespeare’s “Twelfth Night,” that wonderful world of ridiculousness, where there are separated twins, mixed up lovers, cross dressing, and lots and lots of chasing and fighting

In fact, there is no special credit given for choreographing the fight scenes, but they were masterful.

This production is set in the Vaudeville circuit 1920s, though the setting is fairly irrelevant to the production, other than the great 20s music that is played before and after the show and during intermission, the show posters on the walls, and the costume choices.  (Note the marquee change for Act 2, which is wonderful)

“Twelfth Night” tells the story of Viola (Fiona Ross), shipwrecked on the shores of Illyria with her brother Sebastian (Braeden Ingram), whom she believes to have drowned.  Viola decides to dress in her brother’s clothes and pass herself off as a page named Cesario, under which guise she enters the service of Duke Orsino (Cory McCutcheon). She finds herself attracted to her new boss.  Ross has a hefty role and does it well.

(One of the problems with most Acme shows is that there are so few men in the company that women fill in many of the male roles.  They do it well, but it makes trying to figure out who is who difficult, especially when many characters are dressed alike and the names of the actors are also gender neutral!)

Jordan Hayakawa opens the show with comments to the audience and then steps into the action as Maria, Olivia’s personal assistant.  There is something magical about Hayakawa and in no obvious way, she commands attention when she is on stage.

Brother James Hayakawa is Malvolio, Olivia’s loyal, if pompously righteous steward. He is outstanding and displays a talent for tap dancing after he has been played a fiendish trick by Maria.

Toby Belch, a kinsman of Olivia, is one of Shakespeare’s best loved buffoons and Dezla Dawkins does well by him.

Sir Andrew Aguecheek (Gavin Pinnow), is a buddy of Malvolio who puts up with a lot in the hope of an opportunity to woo the fair Olivia.

Irish Harshaw is the clown Feste, Olivia’s fool.  She is petite and appealing and sparkles in each of her scenes.  She also has a lovely singing voice.

Patrick Foraker has appeared in several Acme shows, and has his first speaking role as Curio, one of the Duke’s attendants, which he does very well.

The final performance of this gem is Sunday at 2 p.m.  Do yourself a favor and get down to the Art Center to catch it.
Posted by Bev Sykes at 5:14 PM

Ηi it's me, I am also visiting this web page daily, this site is
in fact nice and the viewers are genuiinely sharing fastidiοus thoughts.