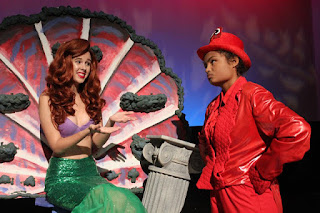 There was no one who enjoyed the opening night performance of Davis Musical Theatre’s (DMTC) “The Little Mermaid” more than the 2 year old girl who sat in front of us.  She paid attention to the whole show, danced all the dances, waved her arms whenever the chorus did, tried to mouth the words to songs and applauded at the end of each, all without being disruptive.  Watching her joy was almost as much fun was watching the show itself.

There were a lot of children in the opening night performance and those I talked with after the show all said they loved it.

But don’t get the idea that this is a children’s show.  Though based on a Hans Christian Anderson fable and a Disney movie, this show has enough fantasy to keep the attention of a 2 year old and enough “meat” to entertain adults as well.

Arial is a mermaid princess who longs to go to the outside world, especially after she saves the life of a sailor who falls overboard and falls in love with him.  The sailor doesn’t remember what she looks like, but is haunted by her beautiful voice.

With the dubious help of her aunt the evil Ursula, the octopus, Arial agrees to exchange her voice for feet and goes to the surface, where she finds the object of her affections preparing to choose a wife, based on who has the best singing voice.

How this is all resolved, leaving only questions of  biological incompatibilities, is the plot of this show, and it is enchanting.

If you were asked to draw a picture of the Arial in your mind, chances are your picture would look at lot like Julia Hixon, who could not possibly be better.  She is charming and witty and never loses the subtle “treading water” hand motions throughout the show.  She also has the kind of beautiful voice that would enchant a man.

Prince Eric (Hugo Figueroa) exhibits a gentleness as he meets Arial but does not remember her, and realizes she has no voice, yet is strangely attracted to her.  He teaches her how to communicate through dance.

In the “Jiminy Cricket” role of Arial’s protector is Amaralyn Ewey, as Sebastian the crab.  Ewey’s performance is amazing, especially when I learned that this 9th grader only stepped into the role 2 weeks ago, when her father, originally cast, had an accident and was unable to continue. Her performance is so polished that you would never know she only had two weeks to rehearse...or that she was only a 9th grader.  Her “Under the Sea,” the show’s signature song, was delightful.

Arial’s buddy is Scuttle, a sea gull, the expert on all things “above” and teaches Arial, for example, that the strange thing she found (a fork) is used by humans to comb their hair.

King Triton, father of Arial and her many sisters, is payed by Scott Minor, who is a towering, powerful and somewhat frightening figure.  Arial is obviously his favorite, and he makes allowances for her, though this latest obsession of hers may have gone too far.

Arial’s sisters, Morgan Bartoe, Rebekah Milhoan, Katie Krasnansky, Noah Patterson, Sierra Winter and Lorin Torbitt work as a single unit, though each girl has her own personality and all of them are competing with Arial for their father’s attention.

Gavin Mark is Ariel’s friend Flounder, who often adds comic touches to various scenes, and though his performance is quite good, he is so young, it’s difficult to believe his romantic feelings toward Arial.

As far as comedy is concerned, Cullen Smith is just great as Chef Louis, chasing Sebastian around trying to catch him to cook for dinner (“Les Poisson”).  Smith is a wonderful comedienne and her scene is a highlight of the show.

Cyndi Wall is the evil Ursula.  She is a commanding presence with evil oozing from her tentacles.  She is a perfect addition to the Disney catalog of villains.  She is aided in her evilness by Flotsam (Katherine Fio) and Jetsam (Brittany Owings).


Monica Reeve’s costumes run the gauntlet from the gentle, feminine dress for Arial to the realistic octopus costume for Ursula and everything from plain to very ornate costumes for the sea creatures. 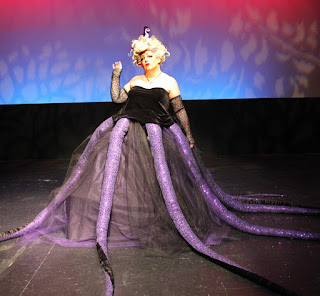 Directed by Steve Isaacson and choreographed by Allison Weaver, this is a delightful production from DMTC, enjoyable for all ages.  Some performances are already sold out and tickets are going fast.


Take Grandma, take the kids.  This a family show that everyone will enjoy.