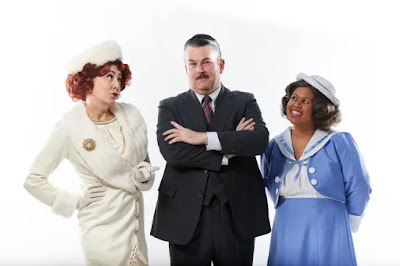 Someone who saw the opening night production of Woodland Opera House’s “42nd Street” (directed by Robert Cooner) told me that it was spectacular and that I would love it. I am happy to report that it is — and I did.

This formulaic Depression-era story of a girl from the midwest arriving in New York, determined to become a star, was first a Busby Berkeley movie vehicle for hoofer Ruby Keeler in 1933, with book by Michael Stewart and Mark Bramble, lyrics by Al Dubin and music by Harry Warren.

In 1980, David Merrick decided to bring the story to Broadway, under the direction of Gower Champion. The stage version used only four of the songs from the original movie version and added songs from other musicals of the 1930s (including one by Hoagy Carmichael, uncredited in the current printed program). The end result was nominated for several awards in 1981 and won a Tony for best revival in 2001.

The cast of 22 fill the Opera House stage and most of them tap dance through several impressive numbers, each of which brings down the house. The best part was that there was nobody out of line — they were as in unison as a murmuration of starlings. Choreographer Staci Arriaga may be the real star of the show!

The central figure of the story of Peggy Sawyer, played by Ernestine Balisi (who played this same role with Davis Musical Theatre Company in 2017). She arrives in New York, wide-eyed and fresh-faced and certain she’ll immediately get cast in a big Broadway musical. She can dance up a storm but has never been on stage before.

Michael David Smith plays Billy Lawlor, the tenor of the show-within-a-show. Smith is a huge bundle of talent in a less-than-huge body. He’s a triple threat — he sings, he acts and he dances up a storm. He and Peggy have an instant rapport and there is hint of a budding romance, though that is not the focus of the story.

Scott Martin is terrific as Julian Marsh, the producer who believes the show, “Pretty Lady,” is going to get him back on top again, after a series of less-than-successful shows. When counting heads, he realizes that he is short one chorus girl and so Peggy, who just happens to be on the street in front of the theater, is chosen, seeming to learn all the dance routines instantly.

Patricia Glass plays Dorothy Brock, an aging, fading Big Name whose sugar daddy, Abner Dillon (David Cross), has backed the production so that his girl can have another hit. While she has a great voice, she has two left feet and so choreography has to be revised so that others can dance around her to hide the fact that she can’t dance.

Lenore Sebastian and Gil Sebastian are Maggie Jones and Bert Barry, the songwriters for the show, offering comic relief throughout. These local favorites do not disappoint and, in fact, Lenore gets some of the biggest applause at the curtain call.
When an accident takes Dorothy Brock out of the cast, Peggy is chosen to be her replacement, in two days, under Marsh’s direction. Marsh is a harsh taskmaster and when Peggy gets the jitters before the curtain goes up, he utters those immortal lines: “Two hundred people, two hundred jobs, two hundred thousand dollars, five weeks of grind and blood and sweat depend upon you. It’s the lives of all these people who’ve worked with you. You’ve got to go on, and you’ve got to give and give and give….You’re going out there a youngster, but you’ve got to come back a star.”

I won’t spoil the show by revealing how it ends, but let’s just say lots of tapping and arm waving are involved.

It’s all very silly, and involves a lot of suspension of disbelief from anyone with even the vaguest inkling of what goes into producing a Broadway show, but what the heck: The important thing is getting from one musical number to the next – and everybody does this exceptionally well.

Woodland offers consistently fine productions and this one exceeds even their own normal standards. Try not to miss it!
Posted by Bev Sykes at 12:27 PM