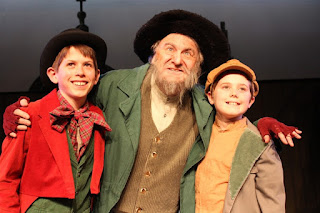 Continuing the celebration of its 34th season of musicals in Davis, the Davis Musical Theatre Company opened an excellent production of “Oliver!”, the musical version of Dickens’ “Oliver Twist,” directed and choreographed by Jan Isaacson with musical direction by David Williams.

The production is blessed with several superb performances.  Recent health problems have prevented Steve Isaacson from taking meaty lead roles lately and I’d forgotten what a truly good actor he is.  He dissolves into the character of the criminal Fagin so fully that you imagine that this is what the role was always meant to be.

His gang of youthful pickpockets – Katherine Berdovskly, Katarina Deltrick, Ailani Gentles, Sage Greenwood, Lexy Hutcheon, Audrey Rycerz and Ruby Schwerin (also orphans in the opening scene) are well rehearsed and wonderfully choreographed.  Audrey Rycerz is the youngest in the cast (her mother Rachel is the housekeeper Mrs Bedwin).  For one so tiny, she was amazingly consistent, knew every word and didn’t miss a beat in any of the dance numbers.

Brian McCann is always a winner and his Mr. Bumble, the beadle of the workhouse where Oliver Twist is raised, is outstanding.  His pairing with Dannette Vassar as the widow Corney, matron of the workhouse, is inspired.  The imposing stature of McCann and the diminutive stature of Vassar make for bits of humor not possible in other productions.  Their “I Shall Scream” is particularly funny.

Also outstanding is Elliot DeJong as the Artful Dodger. A member of the Young People’s program, DeJong is moving into main stage productions and it’s easy to see why.  He dominates in most of his scenes and takes the stage confidently.

Gabriel Mark plays Oliver and while he has a beautiful clear voice (that can hit all those high notes in “Where is Love”) and is a winsome actor, he is having too much fun on stage and needs to learn that starving orphans don’t have smiles on their faces when being chased by the beadle, or when being threatened by the evil Bill Sikes (Jesus J. Madrigal).  If he learns how to compose his facial expressions, he will be an outstanding Oliver.

Hanna Van Noland, is Nancy, the girlfriend of the villainous Bill Sikes (not Sykes, a common spelling error) who ultimately becomes Oliver’s protector, at her own peril.   She has a strong voice and is appropriately emotionally torn in the lovely “As long as he needs me,” where she describes why she remains with an abusive partner.

Deborah Bromley is Mrs. Sowerberry, who with her husband (David Muerle) owns the funeral establishment where young Oliver is sold.  Bromley has an ear piercing shriek.

(Bromley is also a member of the ensemble while Muerle later pays Mr. Brownlow, the man who rescues Oliver after he is arrested for stealing.)

Steve Isaacson and Kimmie McCann are the set designers for this production.  There are many sets, the set for Brownlow’s home the most beautiful of them all.  The cast is mesmerizing as they move the huge pieces around in the dark, as coordinated as a choreographed dance number.  The size of the pieces does somewhat slow the pace of the total production, but it’s worth it.

At the conclusion of opening night Steve and Jan Isaacson were presented with 35 red roses, in honor of the 35th anniversary of the decision to start a theater company.  Both Isaacsons pointed out the importance of the “family” this all-volunteer company has become.  The capacity audience gave them thunderous applause.