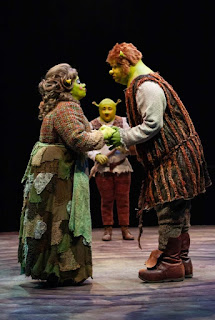 “Shrek” is a fairytale turned on its head. The princess waiting in her tower to be rescued by a handsome prince actually has a terrible secret: The prince is a jerk — and the unlikeable hero is a scary ogre who hates everyone.

Making its Music Circus debut, “Shrek the Musical,” with book and lyrics by David Lindsay-Abaire and music by Jeanine Tesori is a fun couple of hours, filled with just about every fairytale character you’ve ever known to appeal to the kids; enough double entendres and bad jokes to appeal to the adults; and enough farting and belching jokes to appeal to everyone.

This is not an instant stage classic that we will be seeing again for decades, nor does it have memorable music (except for the closing number, Neil Diamond’s “I’m a Believer”). But for what it is, under the hands of director Glenn Casale, it delivers. Based on William Steig’s book “Shrek!” and the DreamWorks animated film, its ultimate message is that everyone is worthy of true love (except, maybe, the prince.)

The show delivers some really marvelous effects, particularly the spectacular dragon, created by Richard Bay (who designed 15 puppets for this production). The dragon swoops and flies and turns in circles on stage and above the stage and is amazingly lifelike, and surprisingly flirty. 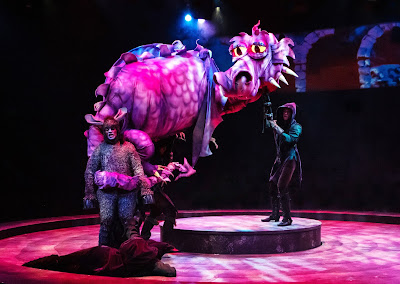 Shrek (Jacob Keith Watson) is an ogre who was left by his parents in the woods on his 7th birthday (Michael Stark plays Young Shrek), with a package of supplies and good wishes that he find a life for himself.

He’s now all grown, totally anti-social and enjoying the privacy of his little swamp when he is invaded by all of the fairytale characters who have been thrown out of the town of Duloc by the evil Lord Farquaad (Steven Strafford). Farquaad is scheming to make Princess Fiona his bride so he can become king and steal her kingdom. Shrek agrees to help the characters if only to get rid of them and return to peace and quiet again.

“Donkey” (André Jordan, who played the role in the national tour which played here in 2011) makes a dramatic entrance, and begs to be Shrek’s sidekick in his search for Fiona. Donkey is annoyingly endearing and Shrek relents and lets him tag along.

There remains only to (a) find the princess’s castle, (b) make it across the treacherous moat and beat the fire-breathing dragon, (c) manage to get the princess out of a locked room many stories tall and (d) return her to Lord Farquaad.

Princess Fiona is actually played by three actresses: Mia Fisher as the young Fiona, Ella Bleu Bradford as the Teen Fiona and Kristen Beth Williams as the adult Fiona. This is no shrinking violet. She has waited many years for her freedom and is going to make the most of it. But she bears a terrible secret, which Donkey accidentally discovers. 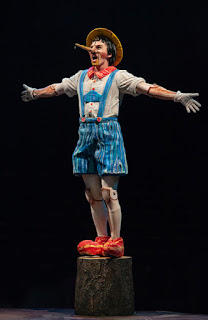 Several of the lesser characters make an impact, primarily the whiney Pinocchio (Tyler Jones), whose nose grows and shrinks on stage without any visible assistance from Jones himself.

Along the way, there are some marvelous dance numbers, such as the rat dance number, a chance for Fiona to shine, and a song called “Build a Wall,” which brought out titters from the audience with lyrics like:

“I’m gonna build me a wall, I’ll make it ten feet high.
See ya later pal, bye-bye.
No one gettin’ in so don’t you even try.
A ten-foot wall.”

This is just a fun production, which teaches us that beauty is in the eye of the beholder and self-acceptance is the way to happiness.

Parents should be aware that it’s rather long; so for younger kids, a matinée might be best.
Posted by Bev Sykes at 3:09 PM