Gentleman's Guide to Love and Murder 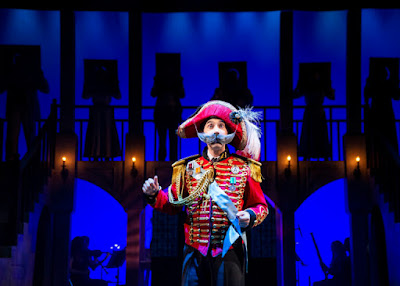 Kyle Stoner gives a great performance in Davis Shakespeare company’s production of “A Gentleman’s Guide to Love and Murder.” In fact, he gives eight wacky performances of members of a noble family, all of whom are doomed to die.

If the musical, by Robert L. Freedman and Steven Lutvak, directed by Gia Battista, sounds familiar, you may remember seeing the Alec Guinness movie “Kind Hearts and Coronets,” also based on the 1907 novel “Israel Rank: The Autobiography of a Criminal” by Roy Horniman.

Daniel Sugimoto is Monty Navarro, writing his memoirs from prison. He recently learned that his mother was disinherited by her aristocratic family when she married the wrong man. She was forced to spend the rest of her days earning a meager living as a washerwoman.

Monty is actually the ninth heir to the D’Ysquith (pronounced DIE-skwith) family. To avenge his mother, Monty decides to kill each of the other heirs, leaving himself as the Earl of Highhurst. Stoner plays each of the heirs, which include the pompous Lord Adalbert (with the fabulously expressive mustache), the Reverend Lord Ezekiel, the dramatic Lady Salome, the charitable matron Lady Hyacinth, the fitness-obsessed Major Lord Bartholomew and an effeminate beekeeper named Henry.
Though Monty is a cold-blooded killer, Sugimoto’s performance somehow makes him a charming, likable character. An enterprising, ambitious and resourceful fellow, Monty sets out to eliminate his family members while at the same time juggling relationships with the two ladies in his life: his mistress and his fiancée.

Sibella (Kyra Kozlenko) is his oversexed mistress who admits to loving him, but who is more in love with the idea of marrying a wealthy man. “Has it ever occurred to marry for love,” Monty asks her. “Now you’re being cruel,” she replies.

Cousin Phoebe D’Ysquith (Alyssa Giannetti) is perhaps the only truly virtuous person in the show. She is determined to prove Monty innocent following his arrest for the murder of the only person he actually did not kill.

Both women give amazing performances with gorgeous lyric voices. Like Monty, Sibella has no moral compass or sense of fidelity. Though she married for money, the closer Monty gets to becoming the heir, the more attracted to him she becomes, and to heck with her husband.

Though there are no real familiar tunes in the show, perhaps the most famous scene from the musical is “I’ve Decided to Marry You,” performed at the 2013 Tonys, where the show won four awards. Sibella is in one room and Phoebe in the other, while Monty tries to keep both from checking out what is on the other side of the door.

The scenic design by Liz Hadden-McGuire is functional, with lots of moving set pieces, allowing the set to be used by both this show and “The Tenth Muse,” running in repertory. But the most clever scene for this show has to be the portrait gallery.

“Why Are All the D’Ysquiths Dying,” which opens Act 2, is wonderfully choreographed, and too bad it was not used as a publicity photo since it is so photogenic. “I’m utterly exhausted keeping track / And most of all, I’m sick of wearing black.”

Music is provided by the nine-piece onstage orchestra, under the direction of Tom Abruzzo.

From the leads down through the multitasking chorus, this is a superb ensemble, vocally and in their facility for verbal and physical comedy. And while Stoner has the most amazing role, there is a reason why he and Sugimoto take their bows together because Sugimoto’s performance is invaluable as the narrator of every scene.

Davis Shakespeare Festival has chosen two blockbuster shows for their 10th summer season, and if you like one, you are certain to like the other.