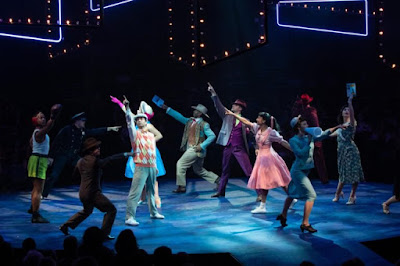 “Guys and Dolls,” currently at Music Circus, was never one of my favorites. It’s OK. I’ve seen the movie several times and have reviewed the stage show five times and was never blown away — until I saw this Music Circus production.

My word, is it wonderful!! I may have to move the show into my “favorites” category.
This musical by Jo Swerling and Abe Burrows — based on short stories by Damon Runyon, with music and lyrics by Frank Loesser — is set on the streets of New York in the 1940s, and the characters are so stereotypically delicious that we can’t help falling in love with them.

These are the lowlifes, gamblers, showgirls and gangsters, and the Salvation Army-like missionaries who try to save their souls.

While everyone in the show is terrific, the real “star” of the show is choreographer Michael Lichtefeld, who has created fabulous dance numbers that blend seamlessly with the storyline. Particularly wonderful was the dance during the overture.

Kudos also to costume designer Marcy Froelich for all those terrific 1940s “gangsta” costumes, especially the wonderful striped suit of Nathan Detroit (Jeff Skowron), desperately trying to find a place to hold his “oldest established floating crap game” in New York, now that Lieutenant Brannigan (Ron Wisniski) is hot on his tail and has managed to seal up all the “usual” places.

It is particularly necessary to find a place to accommodate “Big Jule,” in from Chicago and ready to play. Jerry Gallagher is a wonder. Head and shoulders above everyone else, he is a talented hulk who personifies someone named “Big Jule” and the actor’s bio says he has played this role all over North America and Europe and even on a cruise ship.

Into the world of the dedicated gamblers come the Salvation Army-type missionaries, trying to win souls for God, especially naive, idealistic Sarah Brown (Ali Ewoldt), under the guidance of paternal Arvide Abernathy (Lenny Wolpe), whose love for Sarah is expressed beautifully in “More I cannot wish you.”

Charming gambler Sky Masterson (Edward Watts), who has a girl in every port, sets his sights on Sarah.

From the first moment of their meeting, sparks fly between the two actors and the chemistry is magic.

Detroit has been engaged for 14 years to the long-suffering Miss Adelaide (Lesli Margherita), a singer and dancer at The Hot Box; she’s beginning to worry that they’ll never get married. Adelaide only dreams of settling down in a real home with Nathan.

Their duet, “Sue Me,” is a true crowd-pleaser.

There is a whole stable of wonderful cast members, led by Michael Paternostro as Benny Southstreet, Carlos Lopez as Harry the Horse, and Evan Harrington as Nicely-Nicely Johnson, who delivers the show-stopping “Sit Down, You’re Rockin’ the Boat.”

The popularity of, and enduring affection for, Frank Loesser’s “Guys and Dolls” is easily seen in its award history. It swept the Tonys in 1951, the year it opened on Broadway (where it ran for 1,200 performances), winning not only “Best Musical,” but also awards for Best Actor, Actress, Director and Choreographer.

It had nominations again for Best Actor (Jerry Orbach) in 1965 and was nominated in 1977 for Best Revival of a Musical.

In 1992, it again won an award for Best Revival of a Musical, as well as awards for Director, Choreographer and Actress, with four additional nominations for the revival. In 2009, it was again nominated for Best Revival.

Various productions also hold Drama Desk awards, Olivier awards and Helpmann awards. It was picked to receive the 1951 Pulitzer Prize but because Burrows had been investigated by the House Unamerican Activities Committee, the trustees of Columbia University chose to withhold the award, so no Pulitzer for drama was awarded that year.

Guys and Dolls has a number of familiar tunes (“I’ll Know,” “I’ve Never Been in Love Before,” “If I Were A Bell,” “Luck Be A Lady”). It would be surprising if the audience did not emerge humming one of them at the end of the evening.