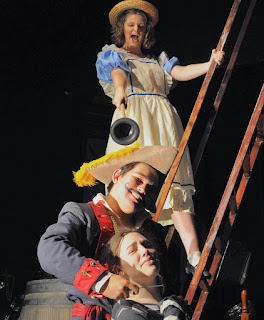 Acme Theatre Company traditionally does three shows a year: an intimate drama in January, a free comedy in the park in May and a large show where everyone gets cast in the summer. Acme members are in the ninth to 12th grade, so their time in the company is only three to four years and every few years, there is a new crop of actors. In the past, the years where the bulk of the cast are new to the company, the shows are less polished than they will be two to three years later.

Happily, “Peter and the Starcatcher,” directed by Emily Henderson, is the exception to that rule. With more “new” people in the cast than “old,” this “Peter” is outstanding. The show is double-cast, and I saw the performance on opening night. You would have thought it was a cast of veteran Acme actors.

Adapted by Rick Elice from Dave Barry and Ridley Pearson’s 2004 children’s novel, this play tells the story of how a nameless, angst-ridden orphan became the immortal Peter Pan. The (air-conditioned) Wyatt Pavilion became a magical place, without the use of many fancy technical tricks. Sets were created using ordinary rope, a couple of ladders, a few household appliances, a couple of boxes, and, most important, the actors themselves.

In “Peter and the Starcatcher,” the young orphan and his mates are sent on a ship from Victorian England to a distant kingdom ruled by an evil king. There are some marauding pirates, a jungle tyrant, less-than-willing comrades and unlikely heroes. Best of all, there is a mysterious trunk in the captain’s cabin, which contains precious, otherworldly cargo. At sea, the boys are discovered by a precocious young girl named Molly, a starcatcher-in-training who realizes that the trunk’s precious cargo is star stuff, a celestial substance so powerful that it must never fall into the wrong hands.

Jordan Hayakawa is excellent as “boy,” who would later acquire the name Peter (Hayakawa alternates with Garnet Phinney in the role). We first meet him and his two friends Prentiss (Odie Lopez/Antonia Zaragoza-Smith) and the food-obsessed Ted (Sara Su/Gavin Pinnow) on a ship named The Neverland.

Molly (Megan Abbanat/Fiona Ross) is the daughter of an English Lord (Julie Knoepfler/Lee Libbet), and herself an apprentice starcatcher, a group of people dedicated to stopping the power of the star stuff from being used for evil. The two overcome bands of pirates and thieves in their quest to keep a magical secret safe and save the world from evil.

Molly’s father, on the ship The Wasp is a starcatcher and is guarding a trunk filled with magical star stuff to prevent pirates from stealing its treasure. Grey Turner is outstanding as the pirate Black Stache (alternating with James Hayakawa) and has one of the best moustaches ever, a trademark of his family.

Peter and Molly manage to dump the trunk into the ocean and jump overboard during the confusion of a storm. After the storm, everyone and the trunk wash ashore on an island inhabited with hostile natives and a giant crocodile (one of the most clever crocodiles you’ll ever see on stage, created using the plainest of materials).

The island natives are Cypher McIlraith/Rylan Valdepena as Fighting Prawn, Allie Gunther/Anja Nittner as Hawking Clam and Kira Cubbage as Teacher in both productions.

While not strictly a musical, there is a three-piece band, directed by music director Oliver Steissberg, for a couple of musical numbers.

Sophia Nachmanoff and Emma Larson are credited with costumes, and what a delightful assortment of colorful costumes they are!

Henderson’s direction results in a tight cast with no lapses in the action. The two hours pass quickly. This is a show that will delight adults and children alike.
Posted by Bev Sykes at 10:55 AM

Labels: Acme, Peter and the Starcatcher