Yeomen of the Guard 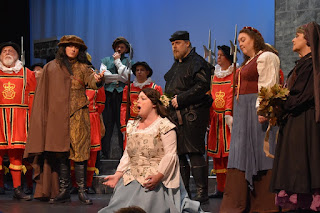 “Yeomen of the Guard,” the 10th Gilbert and Sullivan collaboration is, strictly speaking, not a comic opera – it is a tragedy.  In fact, Gilbert & Sullivan themselves never called it a “comic opera” but rather “an entirely new and original opera.”

That’s not to say it’s not funny.  It’s very funny, but mostly gallows humor, since the entire story is about death.  It deals with beheadings, traveling performers,, mistaken identity, overlapping romances,...and not everybody lives happily ever after.

“Yeomen” has some of the most magnificent Sullivan music, and Light Opera Theater of Sacramento performs it magnificently.  With a 30 piece orchestra, under the direction of Anne-Marie Endres, which knows when to let the music soar (when no one is singing) and when to keep it low so the voices can be heard over the instruments, the orchestra alone is worth the price of admission.

And trust me, you want to hear those voices!  Robert Vann (double cast with Anthony Tavianni) is Colonel Fairfax, a man, wrongly accused, who marries a randomly chosen, blindfolded woman to divert his fortune away from the cousin who wrongly accused him.  He is one of those performers whose first appearance on stage makes you sit up wondering where he’s been all his life.  One place he’s been is performing with San Francisco’s Lamplighters, with whom he performed the role of Fairfax several years ago.  His performance is outstanding.

Timothy Power is quite good as Sir Richard Chomondeley, tasked by Fairfax to find him a bride before his beheading.

Carley Neill (double cast with Jadi Galloway) is Elsie Maynard, who comes to the Tower of London with jester Jack Point (Charlie Baad) to earn some money by entertaining the people.  Her mother is ill so when she is offered 100 crowns to marry the condemned Fairfax, she agrees, knowing that within an hour she will be a widow.  Neill’s voice is as outstanding as Vann’s and the two make the perfect pair.

The focus of the story, however, is Jack Point himself.  Baad gives a good performance, one of his most poignant moments being “A private buffoon,” wherein he describes the life of a funny man who must entertain no matter what tragedies are going on in his life.  “They’re exceedingly kind...they don’t blame you as long as you’re funny,” he sings, dripping irony.  The end of the story for Point has been the subject of debate among Gilbert & Sullivan fans ever since it was first written in 1888.

Sergeant Meryll, of the Yeomen of the Guard, is played by Mike Baad.  He succeeds in helping Fairfax escape, with the assistance of daughter Phoebe (Rikki Pratt, alternating with Paige Kelly).

Wilfred Shadbolt (Eric Piotrowski), the head jailer and assistant tormenter) has his eye on Phoebe, who uses that knowledge to find a way to help her father free Fairfax.  Wilfred is convinced that if Point can be a jester, he can too and their “Cock and Bull” is very funny.

Lenore Sebastian, familiar to Davis audiences, is Dame Carruthers, born and raised in the Tower and now its housekeeper, fiercely proud of its workings (“When our gallant Norman foes”), She is furious that a prisoner has escaped and nobody can find him.

Rebecca Cox is her niece Kate.  The character exists mostly to add a fourth voice to the lovely madrigal “Strange Adventures.”

Scenic Designer Dwayne Slavin has made the most of the small stage with a lovely Tower of London, and Theresa Vann Stribling has credit for the lovely costumes, though the striking yeomen’s uniforms are from Valley Light Opera.

This rarely performed production, directed by Mike and Debbie Baad, is one of the best I’ve seen from Light Opera Theatre of Sacramento.  From the wonderful orchestra to the strong chorus to the beautiful visuals to the perfectly cast principals.

If you’ve been missing Gilbert & Sullivan, this is definitely one you’ll want to see.
Posted by Bev Sykes at 4:32 PM

Labels: LOTS, Yeomen of the Guard