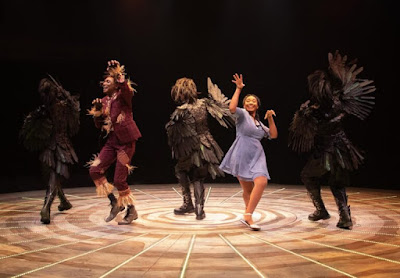 “The Wiz,” now at Music Circus, is a joyous, energetic, audience-pleasing musical with a cast that is mostly Equity members. The result is spectacular.

The history of this musical is older than one would think. Author L. Frank Baum always thought his “The Wonderful Wizard of Oz” would make a good musical and, in fact, a musical was first presented in Chicago in 1902 and played for 12 sold-out weeks. It opened on Broadway in 1903 and ran for 18 months, and productions were held around the country.

However, it was not until 1939, when MGM created the iconic movie that we all know so well, that we formed our visions of what the story should look like. We all know what Munchkins are, that Dorothy follows a yellow brick road with her dog Toto, and that she wears the ruby slippers of the wicked witch whom she accidentally kills.

In the 1970s, disc jockey Ken Harper imagined what the story would be like if the cast were all African-American. With financial backing from 20th Century Fox, he selected playwright William F. Brown and songwriter Charlie Smalls to create a new script using the urban vernacular and music that was a mixture of R&B, soul and gospel.

After a 1974 opening in Baltimore and lots of tweaking, it opened on Broadway in 1975 and received mixed reviews, negative from the traditionalists and more positive from other critics. It went on to receive seven Tony awards, including Best Musical. This is the show that is now gracing the Music Circus stage and leading to a standing ovation from an enthusiastic audience.

There are great special effects, including a marvelous tornado. Music Circus also makes the best use (so far) of its new projection screens that surround the stage.

There is no “Over the Rainbow,” but Auntie Em (Christine Acosta Robinson) opens the show with a warm, wonderful “The Feeling We Once Had.” (Robinson briefly appears later in the show as the wonderful Glinda the Good Witch in a gorgeous costume.)

There is no gathering of little people to play Munchkins, but the costumes for the chorus are unique and they are led by Addaperle (Terry Burrell), the Good Witch of the North. Burrell, like Robinson, displays a magnificent voice and is dressed in another gorgeous costume (kudos to costume coordinator, based on the designs of Paul Tazewell).

As Dorothy “eases on down the road,” she meets the Scarecrow (Kevin Smith Kirkwood, returning to Music Circus after his starring role in “Kinky Boots” on Broadway), the Tin Man (James T. Lane) and the Lion (Phillip Boykin). Boykin has a magnificent voice which could easily shine in the opera world.

It is the Lion alone who gets hypnotized by the Poppy Girls.

Arriving in Oz, they must fight the royal gatekeeper (Jeff Gorti), determined to keep the quartet away from the Wizard until he sees that Dorothy is wearing the silver slippers from the Witch of the East (MGM changed the color of the slippers to “ruby” because they photographed better).

Alan Mingo Jr. is The Wiz and promises to grant their wishes if they will do one simple thing for him — kill Evillene, the Wicked Witch of the West. The encounter with the witch is surprisingly short, but Zonya Love makes the most of it.

The unmasking of the Wizard isn’t done by Toto but by a uniquely Music Circus effect, which is very clever.

Glinda encourages Dorothy to “Believe in Yourself,” and with clicks of her silver slippers, she is once again back in Kansas in the arms of Auntie Em, who must have had a very quick costume change.

This whole production, directed by Glenn Casale, with musical direction by Darryl Archibald, making his Music Circus debut, is simply a delight and a good choice for all ages. The theater was nearly filled on opening night, so tickets are selling well.
Posted by Bev Sykes at 3:06 PM