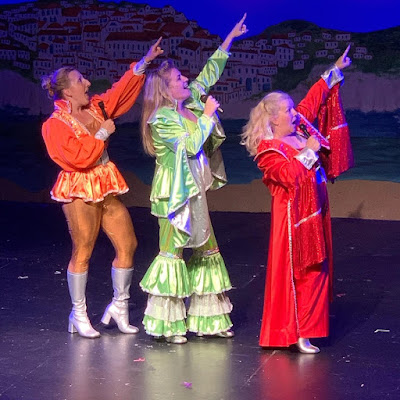 “Mamma Mia,” now in its 21st year, was groundbreaking. The popularity of this “jukebox musical” based on the music of ABBA sparked a raft of similar musicals featuring the music of other musicians — like “Jerseys Boys” (music of The Four Seasons), “Beautiful” (Carol King), “Ain’t Too Proud” (The Temptations) and dozens of others. The stories are sometimes contrived in order to fit in as many songs by the featured musicians as possible.

“Mamma Mia” appears to be having renewed popularity. There have been several productions of it in the Bay Area and at least three in the Sacramento area in the last couple of months. And now a joyous production has opened on the Davis Musical Theatre Company stage.

Directed by Steve Isaacson, with choreography by Kyle Jackson and a cast of 40, this production is spectacular. (Never let it be said one cannot dance in swim fins!)

In 1999, Catherine Johnson decided to take 22 of the best-known ABBA songs (written by Benny Andersson and Björn Ulvaeus) and weave a story around the lyrics. Even if you think you don’t really know ABBA music, you’ll be surprised at how many tunes you’ll recognize — and if you are an ABBA fan this is a must-see show.

The story centers around single mother Donna Sheridan (Andrea Eve Thorpe) raising her daughter Sophie (Abby Lambert) on the Greek island where Sophie was conceived, the product of a liaison with one of three men. Donna has built herself a successful taverna and has no need of a man in her life.

But Sophie is about to be married to Sky (Kyle Jackson) and she wants her real father to give her away. Having snooped through Donna’s diary, she invites three men — Harry Bright (AJ Rooney), Bill Austin (David Muerle) and Sam Carmichael (Tate Pollock), all of whom had relations with Donna around the time of Sophie’s conception — to her wedding, unbeknownst to Donna. The men all arrive, thinking Donna has invited them. Sophie wants her real father to walk her down the aisle.
Also attending the wedding are Donna’s two friends, her back-up singers when the three were Donna and the Dynamos. Tanya (Laura M. Smith) and Rosie (Kasper Cummins) are delightful comediennes, and those costumes were great fun.

(The program gives an ABBA fun fact about those marvelous costumes. They were an easy way to save on the group’s tax bill. ABBA exploited a Swedish law which meant clothes were tax deductible if their owners could prove they were not used for daily wear.)

Andrea Thorpe gives a powerful performance as Donna and gets cheers for her very emotional “The Winner Takes it All.”

As Sophie, Abby Lambert is winsome and engaging, as is her fiancé Sky (Kyle Jackson), whose short shorts make him look leggy and somehow younger than he really is.

The three possible fathers are fun. Harry’s (Rooney) secret is suggested in his various costume changes. Bill (Muerle) is the adventurer, the first to accept Sophie as his daughter, while his duet with Rosie (Cummins) is great. Sam (Pollock) is the love of Donna’s life and, despite a marriage and children of his own, is obviously still in love with her.

Everyone in the show learns something about themselves and the wedding itself, though not quite as planned, is worth the two-act wait.

The three “bows” numbers — tacked on at the end because there was no place in the plot to put them — are great fun and have the audience standing and waving their arms along with the cast.