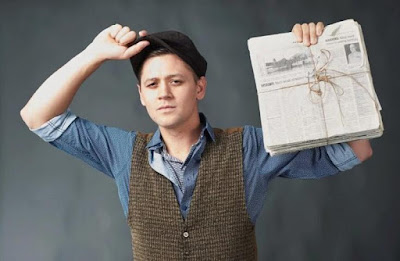 First, there was the spectacular “Mamma Mia” at Davis Musical Theater Company and now we have “Newsies” at the Woodland Opera House. Community theaters may not have the budget for flashy sets and costumes, but when it comes to direction, musical direction, choreography and acting, what our community theaters offer is on a real par with the big boys.

“Newsies,” directed by Crissi Cairns, with musical direction by Jia-Min Rosendale, vocal direction by James Glica-Hernandez and choreography by Jacob Gutierrez Montoya is the Disneyfied version of the true story of the 1899 newsboy strike in New York, and shows how the passion of one person can make a difference in the world.

It is often difficult to fill male roles in community theater, but the 35 member cast is definitely male-heavy and those men are incredibly talented. Each of their five high-energy dances was a show stopper and the audience is treated to everything from tap to acrobatics.

The character of Kid Blink is now named Jack Kelly (Casey Camacho). He’s also an older teen now, so a love interest can be written into the story.

It’s a physically exhausting role, which the talented singer and dancer takes in stride. Kelly struggles with the rights of his fellow newsies and the possible repercussions by the newspaper magnates. He wants to have enough money to move to Santa Fe and is tempted by bribes to give up the fight for fairness.

As Joseph Pulitzer, Rodger McDonald is wonderful as the cold, heartless publisher who cares only about money and has no empathy for the kids.

Jack’s best friend is Crutchie (Collin Robinson-Burmester), the disabled newsie with a positive attitude who becomes the heart of the show. (Collin’s brother Bailey appears as one of the newsies and his father, Stephen, making his theatrical debut, has two smaller roles). He becomes perfect victim for the goons of the publishers trying to squelch the boys.

Making her opera house debut is Grace Leekley as Katherine Plumber, an inexperienced reporter who becomes interested in the David vs. Goliath struggle of the newsies and manages to give them the publicity they need to make their voices heard. She has a lovely soprano voice and has a great solo in “Watch What Happens,” and a beautiful duet (“Something to Believe in”) with Jack. This is Leekley’s first musical in six years and one hopes her success in this role will encourage her to step back on stage regularly again.

“Newsies” focuses on the atrocities of child labor and poverty, but also shows the power of those who stand together for what is right. The Woodland Opera House production is outstanding.