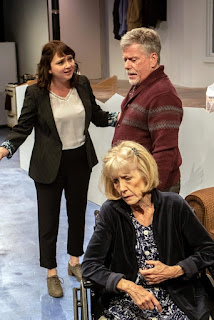 My favorite moment of “The Humans,” now at Capital Stage, is a moment when there is a scene going on in the upper part of the stage, while Erik (Matt K. Miller) stands just looking down at his mother. Momo (Janet L. Motenko), who has advanced dementia, and is napping on the couch. The feeling of love, concern, and frustration in Miller’s eyes is so powerful that I couldn’t stop watching him. It’s exactly how I feel looking at my 100-year-old mother.

“The Humans” is a very funny, yet often sad play by Stephen Karam, which will feel familiar to anyone who has family Thanksgiving dinners. In fact, it is so believable, you feel like you might be watching reality TV instead of a scripted play.

The Blake family are invited to the home of daughter Brigid (Karen Vance), who has just moved into a new run-down apartment with her boyfriend Richard (Damien Seperi). It’s an unusual two-level apartment with only stairs to get from one floor to the next, so grandma Momo has to be taken down the elevator to get to the bottom floor.

The noise of a New York building, with stomping from the folks upstairs and crashing noises from the garbage compactor, interrupt frequently and make everyone uneasy (including the audience, from time to time).

With action taking place downstairs in the kitchen, dining area and living room and upstairs, there is often overlapping dialogue, but it’s easy to follow. Everyone in the family has his or her problem, which all begin to be revealed as everyone drinks a bit too much before dinner.

Erik, a school custodian, has a secret he is hiding. Wife Deirdre (Jamie Jones) is struggling to stick with her Weight Watchers diet and not having an easy time of it with all the Thanksgiving temptations. Both parents are concerned that Brigid and Richard seem to have no desire to marry and thus will not be producing any grandchildren.

Daughter Aimee (Kristine David) is an attorney who has been diagnosed with ulcerative colitis and has been taken off the partner track and knows that she will be let go soon. She has also just been dumped by her longtime girlfriend and is devastated. The pain she experiences from her physical condition is intensified by the pain she feels at having lost the love of her life.

Momo speaks mostly gibberish, though manages to perfectly join with the family in saying grace before dinner, then lapses back into gibberish again. It is so like someone who can’t remember her name but can sing familiar songs or recite familiar prayers from long ago. Motenko so nails the role of someone with dementia that it seemed strange to see the actor, looking perfectly normal, taking a bow at the end of the show.

“The Humans” won the 2016 Tony for new play and was a finalist in for the 2016 Pulitzer Prize for drama.

This is a deceptively simple play, with no hysterics and no name-calling — just a family revealing its weaknesses and struggling with how to carry on. It is both entertaining, yet honest, with a surprising and disturbing conclusion, which I’m not sure I understood. But all in all, it’s an excellent play.
Posted by Bev Sykes at 12:11 PM