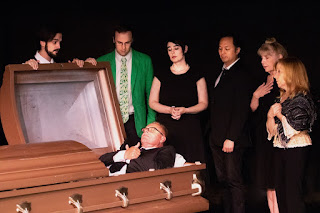 “The Viewing Room,” a comedy-drama by Mark Smith, was performed at the Howe Avenue Theater in Sacramento last year. Director Jesse Akers saw it there, enjoyed it, and decided to bring it to the Winters Theatre Company. In conjunction with the playwright, Akers added some running gags and other effects, while Smith made edits to the script.

I am assuming this play has not been performed elsewhere. The playwright attended the opening night performance.

This is the story of Chester Dumbrosky, who has died and is lying in his coffin when son Matthew arrives, awaiting for the wake to begin. Imagine Matthew’s shock when his deceased father sits up in his coffin and begins to talk with him.

As it turns out, Chester was an emotionally distant father and was allowed to return on the day of his wake to interact with his “grieving” family, make amends and say the things he had left unsaid.
This production has a talented cast of eight, including Brad Haney as the corpse and Cody Svozil as son Matthew.

Dona Marie Akers is Chester’s wife Florence, who sold their house on his demise, bought a condo in Florida and a new Mercedes and isn’t all that happy to discover that he is quasi-alive and will probably disapprove.

Daughters Patty and Debbie are played by Cameron Toney and Janene Whitesell and son Steven is Scott Schwerdtfeger. Chet, Jr., who left home at 18 and has not been heard from in 30 years, is played by Robert Payawal.

The cast is rounded out by Chris Thaiss as Jay, the Undertaker, who is not able to see the “alive” deceased.

There are a lot of funny things in this show, both jokes and physical humor and enough drama to show the extent of the dysfunction of this family. Each person explains how Dad’s attitude throughout their life has affected the adult they have all become and Mom, who took charge of her life on her husband’s death, seems to retreat back into the dominated woman she was during his life.
My feeling watching this play was that this excellent, talented cast is better than the material with which they are working.

While this is an enjoyable evening, there are problems. (For starters, it’s amazing that Mom has sold the house, bought a condo in Florida and a new car — all before her husband’s wake!)

While each of the adult children experiences serious effects of living in this dysfunctional family, each’s interaction with Dad is quite unsatisfactory and Dad’s excuse is that was just the way he was because of growing up during the Depression and working hard to pay the bills. I’m not sure any of them, except maybe Chet Jr., felt any better when he climbs back in his coffin, though his brief return to life at least gives him a chance to tell them all that he loves them, and may give the audience something to think about.

His dance with his wife is very sweet.

If I were still giving stars for reviews, this one would be five for actors and three for the play itself.

I found some humor that the program gives special thanks to the Dixon Florist, Milton Carpenter Funeral Homes and St. Peter’s Catholic Church!