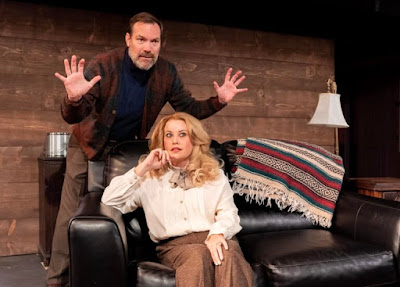 There are some serious problems with trying to review the play “Deathtrap” by Ira Levin (who gave us “Rosemary’s Baby” and “Stepford Wives,” among others). The play holds the record for the longest-running comedy-thriller on Broadway. First produced in 1978, it was nominated for that year’s Tony Award for Best Play. In 1982, the play was adapted into a movie starring Michael Caine, Christopher Reeve and Dyan Cannon. While a few of the jokes seem dated, overall the script holds up well.

There’s nothing wrong with Sacramento Theatre Company’s production, directed by Michael Laun, which is excellent, and the five-character cast is a strong ensemble. The problem is that the show is so full of twists and turns that to talk about any of them would be to spoil the fun for someone new to the play.

Billed as a “comedy thriller,” it is more thriller than comedy and has surprises, plot twists and shocking moments that make the audience gasp — all combined to make for a great evening’s entertainment.

The story begins as writer Sidney Bruhl (Casey McClellan), who is in the middle of a slump — his last four plays have flopped and he is living off his wealthy wife Myra (Natasha Hause) — receives a script of a new play written by one of his students, his first play.

The script is perfect. It has everything to make it a Broadway success and Sidney begins to speculate about how he could convince the student, Clifford Anderson (Dan Fagan) to let him “polish” it, with the thought that he could share in the proceeds — or, better, steal the script entirely and publish it as his own.

As he plots and plans, Myra becomes worried that he will actually kill his student and isn’t quite sure if she’s happy or upset about it. She spends a lot of time pacing and wringing her hands, growing more and more upset. Hause gives a convincing performance, but the more nervous her character gets, the faster she speaks and it is sometimes difficult to understand what she is saying.

McClellan, on the other hand, is powerful and sometimes downright frightening, especially when he paces angrily inches from the front row of the audience. His performance is memorable.
The comic element is provided by neighbor Helga Ten Dorp (Gail Dartez), a madcap psychic, who visits because she senses something painful is about to happen (“tonight, not in many years have I had such a feeling”).

Fagan as Clifford also gives an excellent performance as this complicated character. Clifford is not quite as innocent as we originally think.

Greg Parker is fine as the lawyer Porter Milgrim, who has his own embarrassing secrets, revealed at the end.

Scenic designer Tim McNamara has built a beautiful set filled with hints of what is to come. The thunder and lightning by lighting designer Sarah Winter sync perfectly with the action on stage and add a few more cringe-worthy moments for the audience.


This is a fun night of theater. Go and bring a friend so you have someone to discuss the plot with — but don’t tell anybody else and spoil it for them.