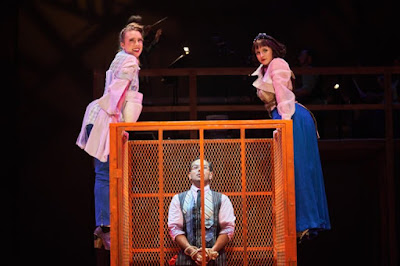 “The Threepenny Opera” was written in 1923 by Bertolt Brecht and Kurt Weill, and based on John Gay’s “Beggar’s Opera” (1728). First performed in Germany in 1928, it had poor reception, though it eventually became a success.

Now, it is being produced on the main stage at UC Davis, directed by Peter Lichtenfels and Regina Maria Gutierrez Bermudez. Even though “opera” is in the title, it is perhaps mostly musical theater, with bits of opera included.

While most musical numbers are unknown, the song “Mack the Knife” became a popular standard and a No. 1 hit for Bobby Darin.

The directors and scenic designer Ian Wallace have chosen to present the full stage, the middle of which is the actual play while the two sides are for set pieces, costumes and relaxing for actors waiting to go on — all visible to the audience.

Behind the stage are two huge screens onto which are projected the action on each of the side portions of the stage. Director Lichtenfels explains, “We are interested in looking at how the actors don’t enter the stage as characters but transform onstage into characters.”

The storyline is a study of criminality at all levels and while characters unapologetically sing songs about the fact that the misery human beings inflict on each other is the foundation of our society, they continue to participate wholeheartedly in that corruption.

Diego Martinez-Campos is Macheath, London’s most notorious criminal. He has a booming voice that could use a little modulation as his opening notes fill the theater, to be followed by notes so soft you can barely hear them.

Toward the beginning, he marries Polly Peachum (Chloe Wasil) the daughter of Celia Peachum (Sophie Brubaker) and J.J. Peachum (Tiffany Nwogu), controller of all the beggars in London. Furious that his daughter would run off with a criminal, Peachum initiates a manhunt for him and vows to see that he is hanged.

Wasil has a beautiful voice and is so innocent throughout, while Brubaker easily steals any scene she is in, if only by her facial expressions. Nwogu’s Peachum is the most powerful character in the play.
Peachum’s plans for Macheath are frustrated by Tiger Brown (William Jiang), the London chief of police and long-time friend of the criminal. Jiang has a wonderful voice for a biomedical engineer.
Others in the cast include Brown’s daughter Lucy (Katie Halls) who claims to be Macheath’s real wife, with irrefutable proof of that fact, Olivia Coca as Jenny Diver, the prostitute who helps in Macheath’s capture and Angelita Sanchez, as Filch, a beggar-in-training.

The story describes the injustice of the capitalist system, where the rich get richer, the poor get poorer and where everything and everyone has a price. How does our society treat people not in our social level? Do we have empathy for beggars, whores and prostitutes? Though nearly 100 years old, the questions are still appropriate today.
Posted by Bev Sykes at 5:34 PM

I'm enjoying your blogs--just started this one.

Delighted that I found your site, fantastic info. I will bookmark and try to visit more frequently.