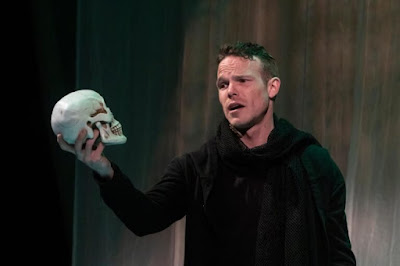 I first reviewed Ian Hopps in 2016 in a production of “Bells are Ringing” for the Davis Shakespeare Festival. I called him “a dream of a leading man.” I have since seen Hopps in several productions in Sacramento and Davis, but he has now taken a huge leap and is stunning as Hamlet in the current Sacramento Theatre Company production. His rendition of the famous “To be or not to be” soliloquy is appropriately mesmerizing, as a tortured Hamlet considers his options.

Directors Casey McClellan and Greg Foro have worked to make the show accessible and engaging for a contemporary audience. It is set in a modern-day Denmark, the set by Timothy McNamara being a series of long sheer curtains that the tech crew moved back and forth to set parts of the stage for different scenes. Costumes by Jessica Minnihan were contemporary.

During Shakespeare’s lifetime, “Hamlet” was his most popular play and still ranks as one of the most performed.

The well-known story is about Hamlet’s rage on learning from his father’s ghost that he was murdered by Claudius (Eric Wheeler), Hamlet’s uncle and the deceased king’s brother. Adding to Hamlet’s rage is the fact that his mother, Gertrude (Jamie Jones) has married Claudius. Hamlet plans revenge and, feigning madness, he stages a whole play to let Claudius know he is aware of his crime.

Wheeler and Jones may be better known in Sacramento for their lighter roles, but they are up to the task of Shakespeare. Jones is particularly moving in her emotional scene with Hamlet in Act 2.

Dan Fagan is Laertes, whose final sword fight with Hamlet was very believable, probably due to the fight choreography of Karen Vance.

Vance also plays Ophelia, Hamlet’s love interest and their brief scenes together show a warmth and loving bond between them, destroyed by Hamlet’s “madness.”

Gary Alan Wright is Ophelia’s loving father Polonius, who provides comic relief but is accidentally murdered by Hamlet (not a good idea to hide behind a curtain during an emotional scene!).

Taylor Vaughan and Devin Valdez are Rosencrantz and Guildenstern, childhood friends of Hamlet, who pretend to remain his friends, though they are now working for Claudius to discover the truth behind Hamlet’s madness.

This is part ghost story, part political intrigue, with a doomed romance that unfolds as a murder mystery, some great sword fights and lots of blood. If you’ve been missing “Game of Thrones,” this production may be a nice substitute.

The one “good guy” is Horatio (Ian Capper), tasked by Hamlet upon his death, not to kill himself in sadness, but to tell his story.
Posted by Bev Sykes at 8:35 AM