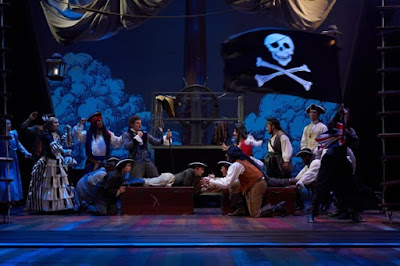 The UC Davis production of “Peter and the Starcatcher,” now at the Main Theatre, directed by Mindy Cooper and Granada Artist-in-Residence Toby Sedgwick is, in a word, spectacular. The directors say they had a delightful time “creating a potpourri of exciting elements — cavorting, sashaying, chuckling, galumphing and swimming our way into and through this wonderful adventure of a play.”
Everything about it is wonderful and, since technical people rarely get credit, I will start with the magnificent scenic design by Samantha Reno, lighting design by Michael Palumbo and projection design by Ian Wallace. The effect of being on a ship in a storm, with animated sea and perfectly synchronized choreography, was so good you almost needed Dramamine. The second-act rainstorm left me surprised that I didn’t get wet.

An especially delightful effect was tossing a cat from one ship to the other, which required several different techniques, real-life and animation — and worked flawlessly. The only disappointment was the crocodile, which was merely an animation and not a real croc, as it was in a recent Acme production.

Costumes by Kikyou Yan were bright and colorful. They made the stage fun to look at.

This book by Dave Barry and Ridley Pearson is a modern-day retelling of the 100-plus-year-old play about an orphan boy known only as “boy” (Nate Challis) who refuses to grow up, and how he became Peter Pan. He has never seen the sun and is uncomfortable around adults, but he becomes a hero and earns his name.

The 15-member cast is excellent, particularly Jennifer Grace as Black Stache, the pirate king, with unique facial hair and prone to malaprops, corrected by his right-hand man Smee (Tyler Pruyn).

Katie Halls is very good as Molly, an apprentice starcatcher, determined to prove herself to her father (Ben Carter), who is on a secret mission for Queen Victoria. Molly will become Wendy in the Peter Pan story, but is already a substitute mother for orphans Prentiss (Ashley Ricafrente), who thinks he is the “boss,” and Ted (Tiffany Nwogu), who is food-obsessed and very funny as he spends much of his time trying to figure out how to eat a pineapple.

Sophie Brubaker is funny as Mrs. Bumbrake, Molly’s very prim and proper Nannie, who is not quite so prim or proper around Alf (Sam Votrian), a flatulent sailor who falls instantly in love with her.
While not a musical, there is a musical duo (Graham Sobelman, keyboard and Adam Forman, percussion) who add to the effect of the action on stage.

This dazzling production is fun for both adults and children.