“And now you know the rest of the story,” as Paul Harvey would say.

Most people are familiar with the story of Ebenezer Scrooge and the transformation which takes place in his life one Christmas Eve, following the visit by his former partner, Jacob Marley, who appears before Scrooge, wearing “the chains he forged in life,” to warn Scrooge that he will be wearing his own chains, if he doesn’t quickly do something to repent.

When you think about it, if Marley was as much of a curmudgeon as Ebenezer Scrooge, it’s a bit out of character for him to be compassionate enough to warn his former partner and to offer him the opportunity for reform and redemption, isn’t it?

Ten year old Hazel Flowers McCabe, the daughter of director Terry McCabe, thought so. After seeing a production of “A Christmas Carol,”starring Tom Mula as Scrooge, she commented to Mula that she thought Jacob “got a raw deal,” helping Scrooge reform his life, but remaining in chains himself.

Mula, also a playwright, agreed with her and found the concept of looking at the incident from Jacob’s perspective so compelling, that, with apologies to Charles Dickens, he took it upon himself to write such a story. The result is “Jacob Marley’s Christmas Carol,” now being presented by Capital Stage at the Delta King theater, through December 24.

Like the Dickens version, Mula’s story was originally a book, published in 1995. The book became a best seller. An award winning PBS radio broadcast was presented and the story eventually made it to the stage, where it has quickly become a holiday favorite in theaters across the country.

This outstanding production at the Delta King, under the direction of Stephanie Gularte, features an unparalleled ensemble, which is second to none. The quartet act as both narrators and performers, each moving seamlessly from narrator to character, often seeming to melt into character mid-narration, dropping American accent for British so skillfully that one hardly notices it has been done.

In the title role is Davis’ own Harry Harris who gives an unforgettable performance. Harris is adept at handling any number of emotions, from that of the ill-tempered businessman to a man suddenly possessed by the exuberance of the Ghost of Christmas Present, to a grief-stricken child, reliving a painful past. When his tears flow freely, dropping onto the stage, you sense they come from very real emotion.

Jamie Jones gives a sparkling performance as the sprightly Bogle, a “malicious little hell sprite” who offers Marley one last chance to save his own soul. Jones manages to be funny, bitchy, and engaging all at once. She begins her relationship with Marley as a torn in his side (or, more accurately, a flea in his ear) and her affection grows for him throughout the play, though she attempts to hide it.

The amazing Lucinda Hitchcock Cone plays any number of roles, beginning with Hell’s recordkeeper, who, on going over Marley’s accounts points out that due to a lifetime of selfishness, he can expect a very unpleasant eternity. 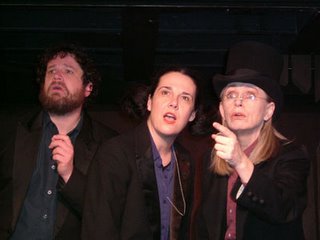 Rounding out the ensemble is Miles Miniaci as Ebenezer Scrooge, whose own story takes a back seat in this production. Miniaci’s angular facial features add to the effectiveness of the portrayal as the actor presents the qualities of the Scrooge we have all come to know -- the blustering curmudgeon, the simpering man discovering the reality of his life, and the joy of a born-again philanthropist. Miniaci handles all emotions with aplomb.

Jonathan Williams’ set design presents no actual set pieces, but several levels on which the actors play. In one scene, Marley and Scrooge climb to the highest point from which they move together to appear to “fly” over London. In another, the recordkeeper seems to grow before our very eyes, with the assistance not only of the set, but also the lighting design of Stephen Jones. Bogle perches on a tall platform to be visible to the audience, while really being a tiny thing hidden in Marley’s ear.

Like the story which sparked this spin-off, Jacob Marley’s Christmas Carol takes us on an emotional ride toward redemption, and for those who know the original inside and out, this first rate production of Tom Mula’s companion piece may be a wonderful change of pace way to usher in the holiday season.
Posted by Bev Sykes at 8:57 AM