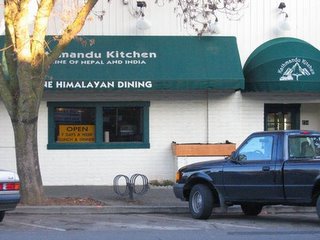 It was an accident that we ended up at the Kathmandu Kitchen last night. We were headed to the new bistro which they built on the site of the old police station, but it had a 35 minute wait time, so we went wandering around to other places nearby and ended up at Kathmandu.

There was a point at which we realized that we could have waited at the other place, since it took so long before the wait staff noticed us. I remembered this as being the situation most other times I've eaten here. This is not a place to come in a hurry, and you will never feel like you're being rushed to finish so they can clean up your table. We sat and looked around the place and remembered when it had been Shakey's Pizza and then Mountain Mike's pizza. We started remembering all the stores and restaurants in town now that used to be other things. The four of us (Walt and me, Jeri and Phil) have all lived in Davis over 30 years and have seen things come and go.

We each chose different things to eat, three of them various curry dishes and me the Kathmandu special, a "sizzling rack of lamb." While we were waiting, we had some garlic-basal naan bread, which was fabulous. Not too heavy or too greasy. Just right.

Unlike some restaurants Kathmandu apparently does not have the "every dish comes out at the same time" rule, since all the curries were delivered long before my sizzling rack of lamb arrived. I nibbled on Jeri's chicken curry a bit, which was quite tasty.

My lamb sizzled all across the restaurant as they finally brought it to the table. And it sizzled while I continued to munch on the plain naan that came with my order.

Finally it stopped sizzling and with a lot of "blowing" I could make it cool enough to put into my mouth. It was tastey, but a bit mealy, as if it had sat in a marinade a bit too long. But still very good. I think, however, that the next time we go there, I will opt for one of the curries.

Toward the end of the meal, the waiter noticed that he had forgotten to light the candles on our table, and in apology, he lit the candles and then brought us a complimentary dessert, kind of like donut balls drenched in a sweet sauce, which was also a nice little morcel to top off the meal.

All in all, this was a good night of dining. Good that we were after a leisurely meal and not a quick pick-up dinner en route to the theatre or something. We eat out so seldom in Davis, that I always forget how much I enjoy eating at this place.
Posted by Bev Sykes at 9:15 AM