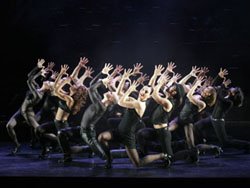 Murder, greed, corruption, violence, exploitation, adultery, and treachery have come to Sacramento and it all takes place across the street from the capitol. I’m sure there is a joke in there somewhere.

“Chicago” points the finger at this country’s perennial fascination with bad boys (and girls) and our raising them to near cult status, as we salivate over every gory detail, the more salacious the better. Think Bonnie and Clyde, Al Capone, O.J. Simpson.

This musical is based on actual events during the 1920s, when reporter Maurine Dallas Watkins reported on the trial of a young woman (Beaulah Annan, “the prettiest murderess”) who killed her boyfriend and then called her husband to tell him, as a popular fox trot record played in the background. As Beaulah sat awaiting trial, she announced that she was pregnant, prompting the headling, “Beaulah Annan Awaits Stork, Murder Trial.”

This movie was the inspiration for choreographer Bob Fosse’s collaboration with Kander and Ebb to produce “Chicago, the Musical,” which opened on Broadway in 1975, with Gwen Verdon and Chita Rivera as the the two jailbirds competing for publicity for their respective crimes. The show closed after a two year run, unable to compete with “A Chorus Line,” but was brought back again in 1996, under the direction of Walter Bobbie with choreography by Ann Reinking (in the style of Bob Fosse) when it won 6 Tony Awards, Drama Critics Circle Awards, Astaire Awards, Olivier Awards, Helpman Awards and a Grammy for best cast recording (among many other accolades). The 2003 movie won the Academy Award for best picture.

The appeal of this show is something that is impossible to capture on film with quite the same energy or excitement. Watching large clumps of people executing complex dance steps and making it look effortless is an experience not to be missed.

As Velma and Roxie, Terra C. MacLeod and Michelle DeJean are superb. In each there are echoes of Verdon and Rivera, and I found myself understanding that Fosse had these two specific women in mind when he originally choreographed this show, the moves seeming to be unique to each character, but specific to the style of dancer.

Greg Evigan is marvelous as the smooth, charming, yet slick lawyer, Billy Flynn, who knows how to work the press and, for a price, make his clients such sympathetic figures that no jury would convict them. Billy’s “All I Care About,” performed with several chorus girls armed with fans that would do credit to Sally Rand, is a knock out.

Carol Woods brings down the house with Matron “Mama” Morton’s “When You’re Good to Mama.” She’s a real powerhouse who received the biggest ovation at the end of the evening.

Roxie’s long-suffering husband, Amos Hart, the man who loves his wife no matter what, was given the appropriate downtrodden characterization by Kevin Carolan, but he has his moment to shine as he sings “Mr. Cellophane,” and shine he does.

There are marvelous ensemble numbers in this piece, which rely as much on choreography as they do on lyrics. The “Cell Block Tango,” where each woman explains how she happened to kill her husband/lover is marvelous, and “We Both Reached for the Gun,” where Billie coaches Roxie in how to give her court testimony are both outstanding.

Scenic design for this show is by John Lee Beatty, who places the orchestra center stage, with character entrances and exits over, under, around and through the orchestra box. Dramatic lighting is provided by Ken Billington and the costumes, elegant yet decadent, are by William Ivey Long.

Chicago is one of those musicals that will have you clapping enthusiastically, and then leaving the theater humming “All that Jazz,” and what more could one want from an evening’s entertainment?
Posted by Bev Sykes at 10:03 PM