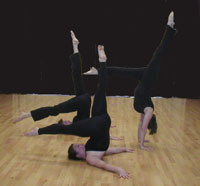 “Ascending / Descending In Spite of, Despite, and Anyway” is the title of the Pamela Trokanski Dance Theatre’s Spring Concert, in the Dance Workshop Theater on Del Rio Pl. The show lasts for an hour and a half, without intermission and features dancers Nicole Bell, Caitlin Barale, Lisa Lin, Katy Lundgren, Rosie Shelton-Mottsmith and Trokanski herself.

The recorded music for this concert is by English composer Peter Gabriel, noted for his world music, described as “pictorial and imaginative.”

The concert is divided into six sections, each inspired by a piece of poetry. The first was “Treasure Hunt” by Robert Penn Warren (Hunt, Hunt again. If you do not find it, you will die.) Prior to the start of the concert, I had been reading a story in which the hero was searching through a grove of trees for the lost treasured memories of his youth, and so as this number started, with three pairs of dancers, one standing, one lying curled around the standing dancer, the visual image evoked a grove of trees through which one might be searching for lost treasured memories of youth, especially as the standing dancer began to “unfold,” much as a tree coming into bloom.

The music becomes more strident, with a Middle Eastern sound to it, the dancers moving with such precision that at times it is like one body with 12 arms and 12 legs.

For a section inspired by Kahlil Gibran’s “On Death,” the dancers were joined by Ashlyn Savidge and Phoebe Anderson, who represented youth and age, respectively. “For life and death are one, even as the river and the sea are one,” writes Gibran. “And when the earth shall claim your limbs, then shall you truly dance.” The dancers, in their black leotards and red vests presented a vision of dancing to life.

Matthew Arnold’s “Dover Beach” speaks of the roar of the waves and “ignorant armies” clashing at night. As the piece opened, the strident, rhythms of the music and the mechanical look to the choreography was reminiscent of the feel of a robot factory and segued into the dancers pairing off, one pounding another into submission, and then raising the “fallen” dancer back again.

“35/10" based on a poem by Sharon Olds was a lovely piece where in the passage of time and the shift from generation to generation, the underlying theme of “replacement,” was shown in the simple act of brushing another’s hair. It was also a beautiful reminder that dancers bodies come in all shapes and sizes and ages.

There was a return to Gibran with a piece based on “On Joy and Sorrow,” showing that “your joy is your sorrow unmasked.” As the piece begins, the dancers present mirror images of each other, showing the yin and yang that are sorrow and joy, that one is merely a manifestation of the other, that without sorrow there is no joy, and vice versa.

Bringing the work full circle was the closing segment based on e.e. cummings’ “Oh Sweet Spontaneous” a joyous celebration of Spring, in which the dancers, joined again by Anderson and Savidge, return to the visual imagery of the tree in the first segment.

The lighting design of Myvanwy Morgan added greatly to the ambience of each of the pieces.