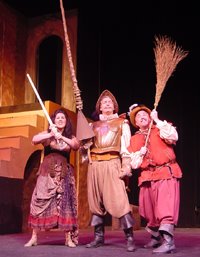 The Broadway hit, “Man of La Mancha,” by Dale Wasserman, Mitch Leigh and Joe Darion, currently at the Woodland Opera House, delivers a simple message which should resonate with anyone today who is overwhelmed by all the negative that surrounds us--war, famine, pestilence, floods, fires, the incompetence of world leaders... “Man of La Mancha” reminds us that with so much darkness in the world, humanity continues to hope.

Director Bob Cooper’s excellent production rises above the level of most community theater productions, with an outstanding cast, without a weak link in the bunch.

Rodger McDonald combines all of the qualities that the principal role demands. He is uneasy as Miguel de Cervantes, the prisoner, awaiting trial by the judges of the Inquisition for daring to assess a tax against a Catholic church, and commanding as Miguel de Cervantes, writer and actor, who agrees to present an entertainment for his fellow prisoners as his “defense” for the trail that will determine whether he gets to keep his belongings or not. He is the befuddled Alonso Quijana, an old man losing a grip on reality who has become an embarrassment to his family, and he is dashing and noble as Don Quixote de La Mancha, the imaginary character Quijana becomes, who tilts at windmills, thinking they are dragons, and who fights for the virtue of his Lady.

One expects a stirring performance of the show’s signature song, “The Impossible Dream,”and is not disappointed, but is just as moved by the sweet “Dulcinea,” sung to Aldonza, a serving wench and town whore whom Quixote insists on treating with dignity, gentleness and respect.

As Quixote’s friend and manservant, Sancho Panza, Paul Fearn is funny without being a caricature. He is slavishly devoted to his friend and would lay down his life for--or with--him, if need be.

Michelle Drever brings a sultry seductiveness and a world-weary attitude to Aldonza, who is puzzled by, irritated by, and intrigued by this stranger’s vision of her. She finds depths in herself that she did not know were there...and is uncomfortable by her discoveries. Drever has a powerful voice which can also achieve a soft gentleness that would melt the hardest of hearts.

Veteran actor and film critic for the “News and Review,” Jim Lane, adds another feather to his cap with a strong performance as the prison “Governor,” who becomes the Innkeeper in Cervantes’ play.

Andrea St. Claire does well with the smaller role of Antonia, Alonso’s niece, who is concerned about his fading competency and, more importantly, what will happen to his estate. St. Claire has a beautiful, strong voice and is able to change her persona when she moves from prisoner attire into the gown of the noblewoman, Antonia. She is another asset to this strong cast.

The “bad guy” is Matthew Abergel in the triple roles of the Duke, Dr. Carrasco, and the Knight of Mirrors. He is cruel and sardonic and handles the role well.

This show actually has a pit orchestra, under the direction of Dan Pool, which adds great depth to the sound and with stage mics (so much less distracting than body mics) there was no problem at all being heard over the instruments. With a fine orchestra in the pit, however, it was a bit puzzling as to why the director felt the need to use recorded music for mood at times.

Jeff Kean created a beautifully massive, impressive set which very realistically depicted a dungeon holding cell. However, the illusion was broken twice, once by flying in a windmill for the scene where Don Quixote has mistaken the windmill for a monster of some sort, and once when a confessional was flown in at the start of Act 2. Since all of the action takes place in the dungeon, the use of these realistic set pieces momentarily shatters the illusion that has been created thus far. It would have been much better to go with the descriptive passages, have Quixote’s battle take place off stage, and fashion a confessional out of something within the cell itself, as they did Alonso’s bed at the end of the show.

Kean’s lighting design, however, worked well, using cool tones for the real-time prison setting and warmer tones for the fantasy of the play-within-a-play.

Costume design by Laurie Everly-Klassen was, as always, excellent. The pull over gown for Antonia was particularly lovely.

This “Man of La Mancha” is an outstanding production which gives hope for good things happening in the world, despite often overwhelming odds.
Posted by Bev Sykes at 5:45 PM