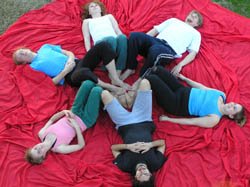 Choreographer’s Hilary Bryan’s “Sacred Space” is performed in front of the U.C.D. Main Theater as part of the Main Stage Dance/Theater Festival, running through April 23. This is a production which attempts to break down spatial borders between performance and everyday life.

In “Sacred Space,” five icosahedrons (a polyhedron having 20 faces) consist of pipes which each contain a complete diatonic scale (twelve tones). The 7 dancers each stepped inside one of the figures, which surround the draped egghead statues, and they began to dance, tapping the pipes to produce a lovely ethereal sound...which unfortunately competed with the drum group that was rehearsing somewhere on campus. 5 minutes into the 12-minute piece, the drums finally stopped and one could finally get the full effect of the lovely tones that were being played.

Eric Kupers’ “Catch Cradle” actually opened the evening at 7:30 at the Davis Commons (in front of Borders) and then moved to the theater for the second half of the “structured improvisational” piece, which by its very nature will change somewhat each night.

“Baú” followed, a lovely piece choreographed by Jennie Amaral. The visual for the piece was stunning. Sheer cloth panels, illustrated the “personal boxes” and experiences that we go through as we deal with our “entrapment.”

“Imagination: love”, choreographed by Whitney Peterson, is described as “coming from a place of imagination.” Peterson may have channeled Tim Burton because it had that quirky Burton look to it. The music by Claude Challe provided a great strident rhythm.

“Point Zero,” by Hector D. Martin-Rodas is loosely based the book “Woman at Point Zero,” by Nawal El-Saadawi, based on an interview with a woman on the eve of her execution. The story of her tragic life is beautifully portrayed in this number, where the dancers were coverings over their faces.

“Captured Movement,” choreographed by Rebecca Abdenour, is inspired by the paintings of Joan Miró, whose style is represented in the costumes by Molly LeGoy and in the abstract lines and angles created by the dancers.

“Sense (it’s an experience)” choreographed by Keith Hennessy is high-flying fun with the rap beat by Miss Elliot. An all-male cast, these are mostly inexperienced dancers, but accomplished athletes, showing that the line between sport and the arts is not that wide.

“Tour,” by Hilary Bryan was an interesting number, described by Bryan as “based on the Space Harmony work of Rudolf Laban together with his theories of Effort and Shape Qualities.” To this viewer, it looked like a group of people going on vacation to a foreign country and pointing out the sights.

Brian Runstrom’s “Cacaphony Undisclosed,” set to original music by Portia Njoku, “encompasses an exploration of humanity and truth and asks if truths can ever really be unmasked. Costume designer Jenny Foldenaur has created black costumes, each with its own decoration, but all faces covered.

Finally, “Pondering Tongue-tied Green Fragrances,” by William Anthony Munkacsy III sports a charming backdrop of a child’s drawing of home, by Lysandra Nelson. The dance expresses deep-seated loneliness and longing blended with a sense of hope and comedy.

Excerpts from the Main Stage Dance/Theatre Festival will be shown at the Davis Farmers’ Market from 10 to noon on Saturday, April 15, and at locations around the UC Davis campus on Picnic Day, Saturday, April 22
Posted by Bev Sykes at 11:58 PM

To make use of these magic weight loss Green Vibe Keto numbers, you need to find a weight loss program that understands their importance and incorporates them in the program.

Fitness experts also recommend we should walk 10,000 Slim X Genie Keto steps a day to maintain good health and weight. Most of us would be lucky to achieve half that in an average day.

We carry this filth in our body from year Super Cut Keto to year. Not many people know of colon-irrigation, or have had an enema, or had a fast.