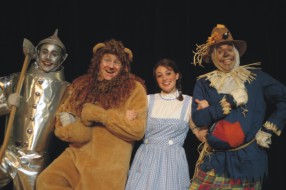 I have a soft spot in my heart for “The Wizard of Oz,” so I was delighted to see that the Davis Musical Theater Company’s current production (in the newly-carpeted Hoblit Performing Arts Center through May 14) is mostly charming. The production brings the movie version of the L. Frank Baum story of the little girl from Kansas who is transported over the rainbow for adventures in the land of Oz to the stage, almost unchanged, with all the Harold Arlen and E.Y. Harburg songs (including “The Jitterbug,” cut from the movie) and dialog almost verbatim from John Kane’s screenplay.

Sadly, this is not DMTC’s finest orchestra. There are some serious problems with the music, but the splendid cast, direction (by Jan Isaacson), music direction (by Steve Isaacson), costumes (by Jeanne Henderson), choreography (by Dian Hoel), scenic design (by John Ewing) and lighting design (by Dannette Vassar) make it easier to ignore the sour notes coming from the pit.

Anyone familiar with the movie will remember the monochromatic Kansas scenes, which in this stage production are done in drab black and white, making the transition to the wildly colorful Oz that much more striking.

Alissa Steiner is almost perfect as Dorothy. She’s a bit tall and mature for the part, but the innocence she projects makes that not really a factor. Her “Over the Rainbow” is delivered in a clear, sweet voice that shows the longing of a young girl looking for a place where there isn’t any trouble.

“Leroy,” who plays Toto, is a lovable dog who can be a real scene stealer.

The rest of the cast is likewise excellent.

Kevin Carvavalho as the farmhand Hunk, and the Scarecrow has a child-like charm about him, and absolutely no bones at all, as befits a proper scarecrow.

Jason McDowell is Hickory the farmhand and also The Tinman. He clanks his way effectively around the stage and is at his most endearing when he learns that the heart for which he has so long hoped is capable of breaking.

And was there ever a better part for Steve Isaacson than that of the Cowardly Lion (also the farmhand, Zeke)? Isaacson presents his very best Bert Lahr impression and becomes an instant audience favorite.

Jill Wright was born to play Glinda, the good witch of the North. She is simply outstanding.

Buffee Ann Gillihan as Miss Gulch and the Wicked Witch gave the role her own interpretation which was, at the same time in jarring contrast to the familiar inflections from the rest of the cast, and refreshing that she made the role her own.

Auntie Em and Uncle Henry are solidly played by the familiar Mary Young and the newcomer Chuck Snipes. Professor Marvel/The Wizard of Oz was the entertaining Adam Sartain.

The children who play the Munchkins were adorable. Unnamed in the program, yet worthy of note were the three girls of the Lullaby League and the endearing three boys for the Lollipop Guild. The children also play the flying monkeys and look like they are having the time of their lives doing so.

This low budget production lacks a lot of the pizzazz that high tech special effects can add, but innovative and often clever substitutions are made. Instead of a razzle-dazzle tornado, we have storm dancers, instead of a yellow brick road we have – we’ll you’ll have to see the unique solution to that problem. Somehow it all just works, though sometimes lengthy scene changes slow the momentum. (And unless the orchestra can play in tune, the interim music should be done by keyboard alone.)

Scenic design was basic, but effective. Using an upper level for the Witch’s castle was perfect and one of the better scenes in the show. No specific credit is given for the construction of the mechanical Wizard, so I assume it was made by scenic designer Ewing. It was great!

With all of the innovative ways of dealing with special effects one scene is a puzzlement. When Dorothy, the Scarecrow and Tinman enter the forest where they encounter the Cowardly Lion, they shudder at how “dark and creepy” it is, though they are walking onto a brightly-lit stage with only a few bare trees for scenery. Later in the show, when they enter the witch’s forest, the lighting is spooky and there are dark branches overhead, so it is not beyond the designers’ abilities to create the “dark and creepy” forest described. The contrast between dialog and actual setting is jarring.

This is a show that will delight any audience, particularly children. One hopes that with a few shows under its belt the orchestra will come together, but the rest of the show is well worth the price of admission.
Posted by Bev Sykes at 12:06 PM