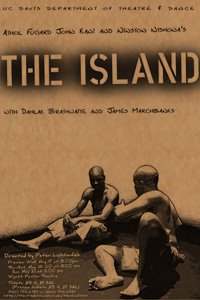 In 1973, in pre-Apartheid South Africa, white playwright Athol Fugard collaborated with black actors John Kani and Winston Ntshona to produce a powerful play called “The Island,” based on events which took place at South Africa’s notorious Robben Island (where Nelson Mandela was incarcerated).

It was against the law for these men to meet, much less collaborate on what was a very subversive work, even given its vagueness, as to time, location, or specific events, and the three men were persecuted for years (Kani and Ntshona were jailed and Fugard had his passport revoked for a time).

More than thirty years after its debut, “The Island” still resonates as a work about honor and friendship and dignity under the most appalling of conditions.

Directed by Theater and Drama Department Chair Peter Lichtenfels, “The Island” opened for four performances only at Wyatt Pavilion, running through Sunday, May 21.

This two person play features Dahlak Brathwaite as John and James Marchbanks as Winston. Both men give powerful and memorable performances. Unfortunately, one of the production’s strengths is also one of its weaknesses. Under vocal and dialect coach Melanie Julian, the men speak with what I can only assume is an authentic South African accent which is often difficult to understand when the dialog gets emotional.

But there is no mistaking the chemistry. even when the words get lost. John and Winston spend most of their time locked together in a small cell, where they share one cup and one washcloth. They do backbreaking work in the local quarry, after which they are thrown back into their cell. Over the years, a strong friendship has grown between the two men, who support each other and try to keep each other’s spirits up as they dream about what they want when they are released (food, booze and women) and reminisce about life on the outside.

The men are rehearsing scenes from Sophocles’ “Antigone,” which they intend to perform for a prison talent show. The parallels between the ancient Greek tragedy and modern So. Africa are painfully apparent, though there is a lot of humor which is used to soften the message.

“The Island” is an all purpose production. It has very funny bits, it has heavy drama, and it has exceptionally fine acting in Brathwaite and Marchbanks. Plan to listen carefully to get past the accents, but once you get into it, the effort is all worth while.
Posted by Bev Sykes at 5:54 AM