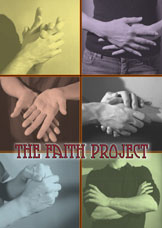 The lines between religion and theater seems to be rapidly disappearing these days. In an effort to hang on to members, churches don’t just conduct “worship services,” now they come with balloons and bands and animal parades and anything that will entertain the congregation and keep them coming back each week.

When a minister like Joel Osteen, with full band and multi-voice choirs, can sell out Madison Square Garden for two performances and fill the enormous Lakewood Church in Houston each week, there has to be a lot of theater involved.

It is not surprising that someone would eventually erase the lines entirely and bring church into the theater.

Susannah Martin, an MFA directing candidate is that person. Her production, “The Faith Project” is that experiment. It will be running through next weekend at the Mondavi Studio Theater. Martin explains that the impetus for her project was “political, personal, and creative.”

She set out to ask what it would mean to create a theatrical liturgy. When is theater spiritual? When is a service theatrical?

The structure for the performance is two nondenominational services, one (“Doubt”) held on Friday night and the second (“Faith”) on Sunday morning. The services come complete with a 5-piece band and four-voice choir.

Set designer Javan Cayo Johnson has created a unique environment. When one enters the theater, it is so much like entering church that one feels the need to whisper. While the audience sits in the seats which line the auditorium, there are huge pews, borrowed from the Unitarian Universalist Church which face a stark altar in the front.

There is a tape playing in the background, which consists of interviews about God and faith conducted with “clergy, scholars, and passersby.”

Martin conceived this piece as a reaction to 9/11 and the whole subject of religious extremism – the idea that it existed only “over there.” She says, “I kept hearing that America, by contrast, was the birthplace and paragon of religious tolerance.” But is it? In this land where the hotly contested issues of any election center around abortion and/or gay rights, where fanatics like Fred Phelps picket the funerals of American soldiers to “prove” that God is angry at this country for its tolerance toward homosexuality, where the President believes that God chose him specifically to lead the country, does this even come close to being a paragon of religious tolerance?

“I had a strong urge to get past propaganda and find out what people were really thinking about religion, belief and faith,” says Martin

The backgrounds and religious beliefs of the cast of this show, who each completed questionnaires to answer, as several incidents in Martin’s own life, were used in writing the script.

The main problem with this show is that it doesn’t seem, itself, to know whether it’s theater or church. We are left wondering about the ministers for the service, Darius (Michael Ortiz), a charismatic minister in the Osteen tradition, who, for reasons that are never explained, decides to leave the altar and sit in the congregation for the second service.

Likewise a second presider, Kavita (Karuna Tanahashi) seems to be edgy and upset through most of the “show,” but we never get a clue as to why.

We do get a glimpse into presider Diana’s (Samantha Blanchard) struggles with belief and her discoveries about herself, but we can see that there is a connection between Violet (Karen Marek) and Kate (Carolyn Thomas), a woman who has come to collect for the poor in Berkeley, but we are left wondering exactly what that connection is, as Violet becomes little more than someone to read announcements, while the focus is on Kate, her struggles in her personal life, and her ultimate surrender to God (an excellent performance by Thomas).

Another visitor, Kendra (Ashanti Newton) gives a powerful performance as a woman haunted by past experiences who is trying to find peace within herself, with the help of a God who sometimes seems to have forsaken her.

Michael (Christopher Maikish), a guest soloist in the choir, is struggling with his own identity issues and trying to find his place in the God community.

I left “The Faith Project” not really sure how I felt about it. It wasn’t exactly theater and it wasn’t exactly church, but something somewhere in between, with good music, lovely choreography (by Kristin Heavey), a nice dramatic element, but something missing at its core. And maybe that’s the whole message of this project after all.
Posted by Bev Sykes at 10:05 AM

Hey,
I really enjoy your blog! Thanks for your honest heart and truthfulness, it is refreshing to hear someone be real. Its cool to read about real people who serve Jesus.

I am a musician, and I would be honored if you would check out my music. All music on my site is free for download. Anyway, don’t want to be a pest, I just thought that I’d share.