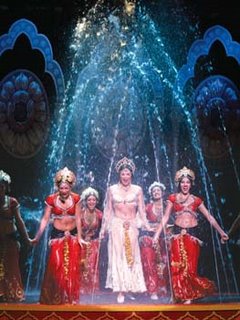 Bombay Dreams, currently at the Convention Center, is based on an idea by Shekhar Kapur and Andrew Lloyd Webber (who may have been having a nightmare that night). The book was written by Meera Syal but rewritten, supposedly to simplify it for Americans, by Thomas Meehan (who should have the fleas of a thousand camels infest his armpits). Music is by A.R. Rahman, one of India’s most famous composers, with lyrics by Don Black.

At the conclusion of the show, a handful of people, scattered throughout the theater stood for the traditional standing ovation, proving my theory that Sacramento audiences will give a standing ovation for anything, no matter how little it deserves it.

To be fair, this is a visually rich show with a few very enjoyable musical numbers and an on-stage fountain for those looking for a wet-sari scene. But the story line makes you want to cringe. I would love to have seen the original version and give Syal’s original script a chance.

The program summarizes it well: “poor boy meets rich girl, they fall in love, a villain comes between them and our hero overcomes all obstacles to win the beautiful heroine with an approving node from his elders.” Add atrocious dialog that apparently is meant to parody Bollywood movies (movies made in India), lots of bare midriffs, sequins and glitter, and choreography with a lot of pelvic thrusts and you can save yourself the price of a ticket.

Sachin Bhatt plays Akaash, a boy from the slums, who has dreams of becoming a Bollywood star and saving his neighborhood, the Paradise slum, from being leveled to make way for a multiplex. Akaash’s best friend is “Sweetie,” the neighborhood eunuch (beautifully and sensitively played by Aneesh Sheth).

Enter Vikram (Deep Katdare), an attorney who represents the underprivileged of Bombay, who volunteers to help the residence of Paradise at no cost. Vikram’s fiancee Priya (Reshma Shetty), the daughter of washed-up film maker Madan (Suresh John) wants to be a film maker herself, and make films of importance, not the fluffy Bollywood fare. There is an instant attraction between Akaash and Priya (of course).

Through a twist of fate too complicated to explain, Akaash catches the eye of Rani (Sandra Allen), Bollywood’s reigning queen, who insists that he be her leading man in her next film. Madan casts him, on the condition that he never reveal that he is from the slums, feeling that an audience would never accept an “untouchable” as a movie star.

Not surprisingly, after a rocky beginning, Akaash becomes a huge star and wins not only the heart (or at least the body) of Rani, but the Bollywood equivalent of an Oscar as well. With all his slum friends there to cheer for him, Akaash denies his slum beginnings, turns his back on everyone including his grandmother (Marie Kelly), and goes to the award party.

Thankfully things seem to go faster in Act 2, where Akaash and Priya admit their feelings for each other, but admit that their love cannot be because of the disparity in their ranks. Vikram turns out to be the slimeball we all knew he was in Act 1 when it is revealed that he is the one behind the desire to destroy Paradise and build a multiplex. Things come to a crisis, the wedding of Vikram and Priya is interrupted, and almost everybody lives happily ever after.

Bombay Dreams was nominated for Tony awards for costumes and choreography, both nominations richly deserved. If there was ever a show that make it based on these two elements, this is the one. In fact, they would have done better to throw out all the dialog entirely and let the spectacle carry the show--it probably would have garnered better reviews.

If you get a little seat-weary and begin to sneak peeks at your watch wondering how much longer you have to sit there, check out the on-stage percussionists, Deep Singh and Dave Sharma, seated on platforms on opposite sides of the proscenium, each with a fascinating array of percussion instruments.

Bombay Dreams continues through May 21. There are plenty of tickets available.

Rahman's score for Bombay Dreams was way below his own standards.

It was as if he dumbed his style down so that the American audience could follow along.

Thank god he did not do that when he made the jump from regional Tamil films to Bollywood or else I would never have experienced the magic of Dil Se, Bombay, Taal, Meenaxi and multiple other masterpeices he has created over the years.