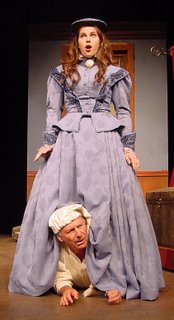 Larry Gelbart’s body of works reads like a who’s who of comedy, including such classics as Sid Caesar’s “Your Show of Shows,” “Tootsie,” “Oh, God!” “Three’s Company,” “The Danny Kaye Show,” and, of course “M*A*S*H,” among many, many other familiar titles.

Is it any wonder, then, that in the hands of Gelbart,“Volpone,” Ben Johnson’s 17th century social satire, could be so delightfully recreated as the 20th century “Sly Fox,” now playing at the Woodland Opera House, under the direction of Lydia Venables.

“Sly Fox” updates the setting from Renaissance Venice to 19th century San Francisco, and changes the tone from satire to bawdy farce, which occasionally has the feel of a Bob Hope stand up routine. It is 2 hours of non-stop knee-slappers and groaners, handled expertly by a strong cast, headed by Stephen Kauffman as Foxwell J. Sly, a rich man who lives for gold (“God, with an ‘L’”) and who has figured out a way to get his friends to bring him even more gold.

Sly’s accomplice is the dapper Simon Able (Dean Shellenberger), whose gambling debts have left him dependent on Sly, and left him with no alternative but to do his employer’s bidding. Shellenberger has a droll wit which suits him well in this role.

Sly’s plan is to let all of his rich friends know that he is at death’s door and that he has not yet decided who should be the beneficiary of his will. One by one, the “friends” show up, golden gifts in hand, hoping to curry favor with the man they think is dying, all the while continuing to fill his chest with more gold.

It’s difficult to tell whether Sly is having more fun watching his swelling coffers or making fools out of his neighbors. When he realizes that they are running out of real gold to bring him, in the hopes of becoming sole heir, Sly decides to show Simon the baser side of mankind by getting his accountant, Abner Truckle (Greg Collet) to offer his wife to the “dying” old man, for a little death bed fun in the sack. He also wants Simon to convince the miserly Jethro Crouch (Micail Buse) to name Sly as his only heir, effectively disinheriting his own son, Captain Crouch (David Cripe).

Collet and Buse are wonderful in their respective roles. Buse, particularly, as the doddering Crouch has the bird-like physique often caricatured for miserly old men and is very funny without taking it all over the top.

The women in the cast take smaller, though no less important roles. Lee Marie Kelly is very funny as Miss Fancy, a prostitute in the best Mae West tradition, who hopes to get a deathbed marriage out of the “dying” Sly. Her best scene, however, is with Jethro Crouch, a scene which seems to be lifted from Vaudeville stage, and which, along with the rather racy dialog throughout the show, would give it an “R” rating.

Alex Weir is the beautiful and virtuous Mrs. Truckle, ready to do anything for her husband, and again, her bedroom scene with Sly is worthy of a Vaudeville routine, and gets the predictable big laughs.

Gerald Ooley is very funny as the Chief of Police, who wants to wring every salacious moment out of the story of the goings on between Sly and Mrs. Truckle.

Don Myers is the befuddled Court Clerk, who transcribes at a snail’s pace. His timing is perfect and very funny.

Rounding out the cast are Jen Smuda Cotter and Lexie Kenyon as Sly’s two maids (who stay in character, even when helping to change set pieces in the dark) and Alan Smuda as the Bailiff.

Kauffman does double duty as both Sly and, in Act 2, as the bombastic hanging judge, Judge Bastardson.

Scenic and Lighting design is by Jeff Kean, who has created a solid feeling bedroom for Sly with a nebulous view out the window which is supposed to be turn of the century San Francisco, but which looks more like the rooftops of a Spanish or Greek coastal town.

Laurie Everly-Klassen designed the costumes, with her usual panache.

There is still a lot of 17th century feel to this farce, but Gelbart’s snappy dialog brings it up to date. “Sly Fox” is not a show to take the kiddies, but for an adult audience this fast-paced, very funny production will have you chuckling throughout and wondering how two hours passed by so quickly.
Posted by Bev Sykes at 4:00 PM