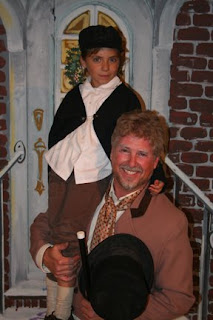 Charles Dickens would recognize some - but not all - of his 'A Christmas Carol,' were he to attend the production by the same name at the Winters Community Theater.

When director Howard Hupe put out the call for children to play the five Cratchitt children and the few other youthful roles, so many kids showed up that he decided to use them all. He and his wife, Germaine, 'borrowed' references from other Dickens works and included bits of dialogue that would allow them to add beggars, pickpockets and other children where possible, to give everybody at least a brief moment to shine on stage.

This feeling of inclusivity makes this production of 'A Christmas Carol' quite special: amateurs doing things for the love of it, and the love comes across very clearly on stage, down to the two children who continue in their roles although injured (a young girl in a cast and a boy in a wheelchair).

Following this introduction, Germaine Hupe takes the stage to give a bit of background about the story, and to tell something of Dickens' life. This helps explain the various themes in his writing, especially in 'A Christmas Carol.'

The play begins as she concludes her remarks, with Dickens himself (Howard Hupe) stepping onto the stage to set the scene for Ebenezer Scrooge's unexpected meeting with his former partner, now deceased, Jacob Marley.

Trent Beeby is a more fussbudgety, ill-mannered Scrooge than the foul-tempered curmudgeon one is accustomed to seeing, but the actor nonetheless sets the stage for the character whose eventual redemption will occur during the next 90 minutes.

The ghost of the chain-laden Marley (Phillip Pittman), whose first appearance is an apparition in a portrait - a great special effect! - initially was so menacing that a nearby father had to take his small child out of the theater whenever the apparition came on stage.

In this version of 'A Christmas Carol,' Marley has a larger role than usual, and remains on stage throughout the show: unseen by Scrooge, but acting as a kind of narrator for the audience. (His menacing persona softens considerably as the evening progresses.)

In due time, Scrooge meets the first of three ghosts: the Ghost of Christmas Past - Germaine Hupe, beautifully ethereal, looking much like Glinda the Good Witch - who takes him back to his own previous Christmases. Alec Romagosa (from his wheelchair) plays the young Scrooge, left at boarding school over the holidays, to be rescued by his sister Fan (Grace Ferguson).

(Romagosa later plays Peter Cratchitt and, in a bit of casting that seems odd for a show with so many children, appears again as Adam, the young boy Scrooge later sends to buy a turkey. Since Peter's scene and Adam's scene are virtually back to back, it would seem that casting a different child as Adam would have been less confusing.)

Robert Fischer is wonderful as the jolly Fezziwig, Ebenezer's first boss, who adores Christmas and loves to party with his staff. Eleanor Yeatman plays his wife, who shows she still can kick up her heels and dance. Dominic Oriando is the young adult Ebenezer, already looking ahead to the fortune he'll one day make, while Manny Lanzaro is his friend Dick.

Tom Rost makes a jocular Ghost of Christmas Present, taking Scrooge around the town. They visit the humble home of his clerk, Bob Cratchitt (Richard Kleeberg), and his wife (Anita Ahuja). Their children are played by Elaine Hupe, Grace Ferguson, Alec Romagosa, Brittany Welty and Emilia Orosco, the latter as the crippled Tiny Tim ... who's cute as a button, but couldn't be heard beyond the edge of the stage.

Not that anybody cared. We all knew the lines.

The ghost also takes Scrooge to see the home of his nephew, Fred (Ben Moroski), who had visited him earlier in the day, and Fred's wife, Elizabeth (Tesssa Rawlinson). Moroski gives a strong performance, and he and Rawlinson share good chemistry as they joke about the sour-tempered Scrooge.

Rodney Orosco plays the Ghost of Christmas Future, who shows Ebenezer the things that might come to pass unless he changes his ways ... notably the gleeful thieves who steal things from his house after his death. Old Joe (Larry Justice) is marvelous, and Germaine Hupe returns as Grandmother, accompanied by her real-life granddaughter, Lauren. Eleanor Yeatman makes up this unsavory quartet, as Mrs. Dilber.

The constraints of the Winters Community Center stage make it a challenge to present a large show like 'A Christmas Carol,' but Howard Hupe and scenic artist Jeff Hesemeyer make great use of all parts of the space. I wish the lighting had been a bit brighter, however, as the faces of the actors never are lit very well.

The painted scenic backdrops, however, are lovely.

The show continues through Dec. 6, with one more matinee at 1 p.m. this Sunday. If you find yourself in Winters, here's a good chance to get a bit of Christmas spirit: a beloved Christmas story, cute kids and familiar Christmas carols.

And you even can buy pumpkin pie at intermission!
Posted by Bev Sykes at 6:23 PM