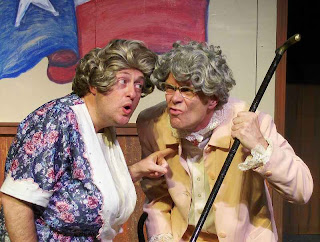 Those quirky citizens of Tuna, the third-smallest town in Texas, have returned to the Woodland Opera House, to share their Christmas Eve celebrations with us in a show appropriately titled 'Tuna Christmas.'

Thurston Wheelis and Arles Stuvie are back at the microphones at radio station OKKK, ready to dispense all the local and world news:

'In international news today, Christmas violence flares, leaving thousands dead in Mag ... Mada ... Madg ... I can't even pronounce the name of the place. They're foreigners, so never mind.'

There's DiDi Snavely, who manages Didi's Used Weapons Emporium ('If we can't kill it, it's immortal'), and who is running her annual holiday sale - 'Wouldn't you rather shoot somebody, than watch 'em run off with your new toaster oven?' - and has a rather unusual collection of decorations for her shop's Christmas tree.

Elmer Watkins is inviting everyone to the local Klan's annual Christmas party and skeet shoot: 'Our theme this year is The Whitest Christmas Ever.'

As always, Bertha Bumiller is at her wit's end about her children and threatening to 'put on that Andy Williams album' if they don't shape up.

Sullen daughter Charlene and son Stanley, the town delinquent, are both in the town's production of 'A Christmas Carol' ... by 'Charlie Dickens.' Charlene is taken with the director, Joe Bob Lipsey - who is a bit 'odd' - while Stanley is hoping the production will help him finally get off parole, so he can leave town.

All Stanley wants from Santa is 'a bus ticket out of this black hole.'

But the production may not take place at all, if penny-pinching Dixie Dewberry has her way. The theater hasn't paid the electric bill, and she's threatening to pull the plug on the power, so the show can't go on.

Meanwhile, a town phantom is running around vandalizing the decorations of the homes vying for best Christmas displays, such as putting Fruit of the Looms on the figures in the nativity display belonging to Vera Carp, the town snob.

Sweet Aunt Pearl may know more about the phantom than she's saying, but she's busy looking for a weapon to kill the birds in her front yard.

'I haven't had a gun in my house since I accidentally killed my second husband,' she admits.

The Smut Snatchers of the New Order are trying to get 'Silent Night' banned, because they aren't sure people should sing about 'round young virgins.'

In addition to all the favorite characters from Jaston Williams, Joe Sears and Ed Howard's first play, 'Greater Tuna,' 'Tuna Christmas' adds new characters, such as Lipsey and waitresses Inita Goodwin and Helen Bedd, among others.

With the help of bouffant hair pieces, a variety of colorful costumes - designed by Laurie Everly Klassen - some interesting set pieces that hide half of the body here and there, and an incredible crew, the actors accomplish the transitions from one character to another so smoothly that the audience isn't aware of what certainly must be organized pandemonium backstage.

Dave Hushbeck is the sound designer, a crucial job in this production.

Kean is credited with set design, which the program notes is based on the original show's production design.

It allows for characters to disappear in one door and emerge seconds later out another as a different character, for curtains to hide parts of the body that are moving into place behind a counter, and so forth.

While the play has a semblance of story from beginning to end, it's really more of a collection of vaguely related skits.

So, gather up your funny bone and head to the Woodland Opera house for a good chuckle and a few guffaws, to get you in the proper mood for the coming holiday season.
Posted by Bev Sykes at 5:46 PM