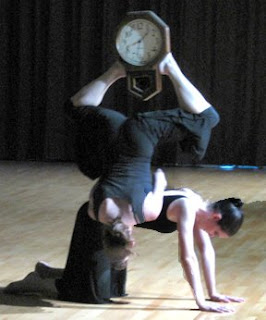 I just love Pamela Trokanski's dance concerts. Where else can one hear Pink Floyd, Mozart and the soundtrack from 'Pajama Game' in the same evening?

The Pamela Trokanski Dance Theatre's 2008 fall concert, called 'It's About Time,' examines the effects that time - and clocks - have on our lives, delves into the history of modern time, and explores the elasticity of time, depending on the circumstances under which we find ourselves.

The evening starts with a section titled 'The Memoirs of Jesse James,' a reference to a work by Richard Brautigan, who 'remembers all those thousands of hours that I spent in grade school watching the clock ... my teachers could easily have ridden with Jesse James for all the time they stole from me.'

To a recording of 'Racing with the Clock' from 'The Pajama Game,' the dancers mimic the mechanism of a clock, from the hands to the inner workings. At one point, they twirl long sticks that mimic a clock's face.

Trokanski's stage design adds to the sensation of passing time, with several kinds of clocks displayed on panels, and a fractal-like projection on the back wall that runs throughout the performance. (Patrick Fitzgibbons gets credit for 'technology.')

'Jesse James' moves smoothly into 'NPR and Radiolab' ... which, I have to say, may have worked against the ultimate goal of a dance performance. The narration follows the history of 'time' and the degree to which U.S. railroads influenced the standardization of time. It also discusses the philosophy of time itself.

To wit: Why does time pass so slowly for children, yet so quickly for adults?

In truth, though, this history lesson was so fascinating that I wanted to return home to study up on the origins of time, rather than concentrating on the hard-working dancers in front of me.

This is not to denigrate the dancers, merely to explain that what should have been background material became so interesting that it briefly overshadowed the dancing.

The performance became more of a background to the lecture, rather than the other way around.

'Flight of the Bumblebee' provided an interesting example of the juxtaposition of time: a delightful bit of choreography accompanied by a podcast of the 'Ode to Joy' portion of Beethoven's ninth symphony, digitally stretched to last 24 hours. (Thankfully, only a brief portion of the 24-hour symphony was played.)

Two dancers - not singled out for identification in the program - performed in 'Nancy Grows Up,' against recordings made by Tony Schwartz of his daughter's vocalizations from birth to age 12.

Trokanski's goal in each of her concerts is to be both humorous and thought-provoking. 'It's About Time' succeeds perhaps better than most; it's an absolutely delightful pastiche.

Best of all, if you check your watches when the performance concludes, you'll have spent only 75 minutes in the theater, give or take a couple, and that time will have been spent very well indeed.
Posted by Bev Sykes at 3:53 PM