Every Xmas Story Ever Told 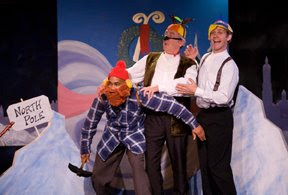 We've seen the news reports; we've felt it in our pocketbooks.

There's no denying it: Economic times are tough. People are scaling back on all sorts of things, and seeing fewer Christmas theatrical productions may be one of the cost-cutting measures being considered.

Well, Capital Stage has come up with a solution. Why agonize over which productions to see ... when you can see all of them at once?

'Every Christmas Story Ever Told' is a hilarious show that covers everything from 'How the Grinch Stole Christmas' to Charles Dickens' beloved 'A Christmas Carol,' with some surprising other stories in between.

This fast-paced show is written by Michael Carleton, John Alvarez and Jim Fitzgerald, with original music by Will Knapp. This production, directed by Greg Alexander, stars a delightful trio of weirdoes - Anthony D'Juan, Gary Martinez and Jonathan Williams - who play (oddly enough) Anthony, Gary and Jonathan.

In the same vein as the 'reduced Shakespeare' productions, the authors have taken just about every beloved holiday story in existence, added a bit of Christmas history from around the world - who knew that Christmas had such a black side? - and a few familiar classic Christmas commercials, and blended everything more or less seamlessly into about 90 minutes of laughter.


The play concludes with a zany rendition of every Christmas carol ever sung, complete with choreography. Sort of.

As far as the play's plot is concerned, Jonathan wants to put on a traditional version of Dickens' 'A Christmas Carol,' the way it was written; he tries valiantly to do so, but his fellow actors are tired of doing only Dickens. They want to salute all the other 'BHCs' (beloved holiday classics) instead.

Jonathan finally relents, on the condition that he also be allowed to perform a straight version of 'A Christmas Carol.'

The trio elicits suggestions from the audience for favorite movies, television programs, Christmas foods, traditions, commercials and so forth. It doesn't stop at Christmas, but also gives a nod to Hanukkah ('It bears similarities to other Jewish festivals: They tried to kill us. We survived. Let's eat!') and Kwanzaa ('The best part of Kwanzaa is that you'll never see a special called 'A Very Brady Kwanzaa.' ')

The meat of this show, though, is its retelling of all the stories we know so well.

Jonathan is reluctantly dragged into the project when he dresses as the title character for a very funny send-up of 'How the Grinch Stole Christmas.' He's also a fabulous Scotsman and shines as Hermie, the elf who wants to be a dentist in 'Rudolph the Red-Nosed Reindeer' (hilariously renamed, for copyright reasons).

In Act 2, Williams does a credible James Stewart imitation in a salute to 'It's a Wonderful Life.'

Zany D'Juan is hilarious, whether donning antlers and a shiny nose, or saying nothing at all - eloquently - as the Ghost of Christmas Yet to Come. Memories of his performance will keep you giggling throughout the holiday season.

As for Martinez, well, you just want to wrap him up and take him home. He plays all the lovable characters to the hilt, with the sincerity that he gives Linus reciting 'The True Meaning of Christmas.' You can't leave the theater after seeing his performance without Christmas in your heart.

Of course, Christmas wouldn't be Christmas without fruitcake, and the trio gives salute with 'What the Hell's the Deal with Fruitcake,' which includes a salute to 'The Dating Game' ... 'where we learn all the latest facts and figures on that fruitiest and nuttiest of cakes.'

Nearly every well-known Christmas show is covered during the 60-minute first act, even if only through bad puns or passing comments.

Act 2, only 20 minutes long, is designed to be Jonathan's promised 'A Christmas Carol' ... until Gary realizes they've forgotten 'It's a Wonderful Life.' Until you see these two classics woven together, you may not realize how much alike they are.

Williams has designed a clever, utilitarian set that folds and unfolds. Rebecca Redmond is credited with costume design, and some of the quick changes are quite ingenious. Steve Decker's lighting design and Brad Thompson's sound design also are critical to the play's effectiveness.

And as you leave the Capital Stage theater, you'll definitely be ready for the holiday season ... and you'll likely go about greeting everyone with a cheery 'Mata-Ki-Te-Rangi' ('Merry Christmas,' in Icelandic).
Posted by Bev Sykes at 9:23 PM