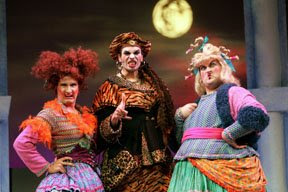 The Sacramento Theatre Company has brought back its wildly popular holiday run of 'Cinderella': Mrs. Baden-Rotten and her daughters are terrorizing sweet Cinder once again, and delighting audiences in the prospect.

This version of 'Cinderella' - book and lyrics by Kate Hawley, music by Greg Coffin - embraces the form of a traditional British pantomime, which often takes fairy tales and delivers them in a manner that can be enjoyed by both parents and children. The humor may go over the kids' heads while tickling adult funny bones, but children will be delighted by the slapstick comedy, colorful costumes and sets, and the opportunity to be included in the story.

It's a win-win situation for all. STC's production, directed by Peggy Shannon, does not disappoint.

Heading the list is Tristan Rumery, as Prince Charming; he has a deliciously smooth voice that blends beautifully with Hilary Wells in the title role. (She alternates with Morgan Cook.) Wells' demeanor and innocence are in stark contract to her stepmother and stepsisters ... and it doesn't hurt that she has a wonderful voice, as well.

Cross-dressing roles are a traditional aspect of pantomime, and this production couldn't do better than the trio of William Elsman, as Mrs. Baden-Rotten; Michael RJ Campbell, reprising his role as daughter Goneril; and Brian Rodda, as daughter Regan,

The irrepressible Elsman towers above all in his impossibly high heels, camping around the stage in heavy make-up, and wearing an outfit that would put a Tiffany lamp to shame. It's 'La Cage aux Folles' meets Mother Goose, with the generous help of costume designer B. Modern.

Campbell is the whiny, pouty, zaftig sister, with kewpie-doll lips and wispy pony tails, who causes everyone on stage - and in the band - to bounce whenever s/he jumps.

New to STC is local favorite Jim Lane, who for some reason is left off the program's cast list as Baron Hard-Up, Cinderella's perennially inebriated father, who is totally smitten with his overbearing wife and has let her run him into ruin. Lane provides many chuckles, whether staggering around the stage with his foot in a bucket, or trying to remember ... well ... anything.

New to the traditional plotline of 'Cinderella' are many characters, starting with Caleb Salmon as Buttons, Cinderella's artistic best friend, who is not-so-secretly smitten with her. His woodland dance, with a lovable, large, picnic-basket-stealing bear (Jared Lee), is a lot of fun. Lee's definitely a favorite with younger audience members.

A bit of fairy tale crossover also brings in Bo Peep (Jessica Goldman). Peep is a rabid, anti-monarchy feminist with a Scottish brogue so thick she may spray a few folks in the front row, with her more throaty syllables. Peep herds a flock of sheep as agile as the Rockettes; they all sashay around the stage doing bumps, grinds and high kicks. It's a tour-de-force for choreographer Michele Hillen-Noufer and dancers Tayler Anderson, Maryann Good, Leah Hassett, Ella Isaguirre, JuliAnn Machschefes and Amanda Salmon.

No Cinderella would be complete without a fairy godmother, and Lucinda Hitchcock Cone is charmingly ditsy. Thanks to Giulio Perone's scenic design and Victor En Yu Tan's lighting design, Cone pulls off a pretty impressive transformation of pumpkin and sheep into coach and horses.

Rounding out the cast are Barry Hubbard as the King, and Orlana Klip as the Queen, both down-to-earth monarchs; she even dusts the castle in her frilly apron, and forgets to take it off when the time comes for the big ball.

The show includes plenty of audience participation, which is a lot of fun for the kids, especially during the search for someone to wear the glass slipper.

'Cinderella' may not be everyone's idea of the ideal Christmas show, but one thing cannot be denied: If you're seeking fun for the entire family, this production can't be topped.
Posted by Bev Sykes at 9:11 PM

It would be nice if Tom Shorba paid his debts to his ex.