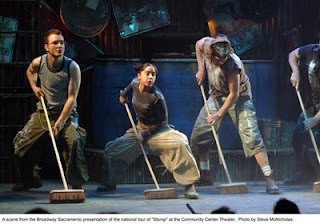 Drive around Davis these days, and you'll see carpets of fallen leaves waiting to be swept up.

If you're looking to do something more creative than just sweeping up those leaves, I highly recommend the production of 'Stomp,' continuing through Jan. 4 at Sacramento's Community Center Theater. The show opens with a dazzling display of what can be done with a push broom, and is certain to add flair to any humdrum sweeping task!

'Stomp' is a 90-minute, nonstop, action-filled show where one learns that just about anything - from garbage cans to plastic bags - can become rhythmic noisemakers. In fact, as one who has raised a number of children, I imagined the upbringing of these performers, their harried mothers yelling 'Will you please stop drumming on the laundry basket!?' ... now having to admit that their kids found a way to turn an annoying childhood habit into a lucrative career.

'Stomp,' a unique combination of percussion, movement and visual comedy, was created in the summer of 1991 in Brighton, in the United Kingdom. The show was the result of a 10-year collaboration between its creators, Luke Cresswell and Steve McNicholas.

They first worked together in 1981, as members of the street band Pookiesnackenburger and the theater group Cliff Hanger. Together, these groups presented a series of street comedy musicals at the Edinburgh festival throughout the early '80s. After two albums, a UK TV series and extensive touring throughout Europe, Pookiesnackenburger also produced the highly acclaimed 'Bins' commercial for Heineken lager.

The piece originally was written and choreographed by Cresswell, as part of the band's stage show; it proved to be the starting point for the climactic garbage can dance in 'Stomp.'

In 1991, Cresswell and McNicholas first created 'Stomp,' previewing at London's Bloomsbury Theater and premiering at the Assembly Rooms in Edinburgh, where it became the Guardian's Critic's Choice and won the Daily Express 'Best of Fringe' award.

'Stomp' began its run at New York's Orpheum Theater in February 1994, and it quickly went on to win both an Obie and a Drama Desk award for 'most unique theater experience.' By that summer, the first American cast was in place at the Orpheum, freeing the original cast for sell-out tours of North America and Japan.

No program credit is given for the multi-level set design, but the stage is dominated by a metal wall hung with all sorts of noisemakers, from hub caps and highway signs to oversized plastic bins.

Steve McNicholas and Neil Tiplady are credited with lighting design, the lights playing a huge role in the show's feel. Some of the best numbers are lit from each side of the stage, casting large, eerie shadows on the theater walls, and giving it the effect of some ancient tribe dancing by the light of a fire in a cave somewhere.

One of the most clever bits is a kitchen sink number (proving that this cast does, indeed, use everything up to and including the kitchen sink). Watch the guy on the far left, for a very funny ending to this number.

Another number involves oversize inner tubes attached by bungee cords around the waist, giving the whole cast the look of babies in the Michelin tire commercials.

And one clever bit finds the cast going through garbage bags and pulling out all sorts of things, like a paper cup with a straw in it, and finding out what sounds they can get out of each. (Tip: A banana peel is not a good noisemaker!)

The audience also gets involved, as increasingly more complicated hand claps are demonstrated for everybody watching.

This show's appeal was apparent in the family group that sat next to me, all of whom seemed to love the production: a white-haired grandmotherly type, who looked like she might have gotten lost on her way to a Lawrence Welk retrospective; two 30-something parents; and two candy cane-sucking little boys, who began experimenting with the different sounds they could make with their hands as they clapped for each numbers.

I had a feeling that Mom soon would lose her garbage can lids after they got home, or that she'd soon find her kids walking around on aluminum cans.
Posted by Bev Sykes at 8:30 PM