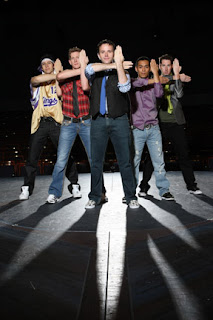 The huge empty sections of the theater on Tuesday evening - something rarely seen at the Wells Fargo Pavilion - may indicate that this show didn't appeal to traditional opening-nighters.

But it's a sweet little show with lots of energy and charm and, at 90 minutes (with no intermission), you'll be home in time to watch 'The Daily Show' or David Letterman.

Described as 'a new musical about a struggling Christian boy band riding the wave of America's latest fascination with religion,' 'Altar Boyz' is a satirical look at both boy bands and God music. The score offers lyrics such as

Jesus called me on my cell phone;
No roaming charges were incurred.
He told me that I should go out in the world
And spread His glorious word.
He beeped me!
He faxed me!
He e-mailed my soul!

Although the play lacks an actual plot, each character has a back-story. Matthew, the leader, keeps the group in line, although he hides a little secret; Mark is gay and Catholic, and struggling with the turmoil that brings; Luke seems to spend a lot of time in rehab for 'exhaustion'; Juan is an orphan seeking his parents, but finding family within the group.

Abraham is the Jewish altar boy who writes the lyrics for the songs.

After years spent performing in bingo halls and youth group rallies, the Altar Boyz have moved on up to a big-city concert: in this case, in Sacramento. They've grown into pop stars with a mission to save the burdened souls in the theater.

Considerable discussion involves the group's sponsor, the 'Sony Soul-Sensor,' which continually scans the souls in the audience and determines how many still need saving. The hook is that the boys must keep singing until all souls have been saved.

(After about an hour, we begin to get impatient with the hold-outs!)

The music varies from ballads to upbeat pop, and even includes a rap about the miracles of Jesus:

His posse's in the water,
Rowin' all night.
While Jesus prayed to his father,
They were hellah far from shore.
And the sea was wicked rough,
When they saw a ghost just walkin' on the water (scary stuff!).

The play includes a bit of audience participation, and a prayer meeting for all the prayers supposedly submitted by audience members prior to the show ... chosen from a revolving drum, as one would select winning lottery tickets.

As Tuesday's performance concluded, some audience members leaped to their feet with cheers ... while others sat in their seats looking stunned, and asking each other what they'd just seen.

It's a pleasant night of theater, but perhaps not the best show to hit the Music Circus stage.
Posted by Bev Sykes at 3:17 PM

I suspect the empty seats (which were also empty for Thoroughly Modern Millie) have more to do with the economy than with the show.

I'm sure that had something to do with it, but I suspect "Annie" would have filled the seats. We'll never know.