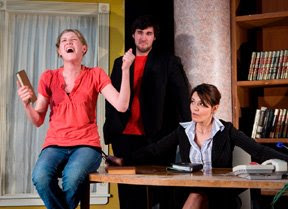 'Erratica' is Capital Stage's first world premiere to emerge from the company's Playwrights' Revolution project. In 2007, Capital Stage was awarded a $40,000 grant from the James Irvine Foundation, to create and develop the Playwrights' Revolution. Its goal: to celebrate new works and encourage the creation of bold new plays for the American theater.

Each year, several new plays are selected to participate in a series of round table and staged readings. 'Erratica' is the first of these plays to have been transformed into a fully mounted professional production.

A mere one to two minutes after the play begins, with hormonally charged Professor Samantha Stafford (Stephanie Gularte) speaking to Gregory, an unseen student admirer, the audience was howling with laughter. The pace continued throughout most of the play.

Samantha is trying to write a book on Shakespeare, but distractions abound: Gregory is madly in love with her; her publicist (Jamie Jones) wants her to do something more commercial, which involves Cosmopolitan magazine; and she's persistently haunted by an entity claiming to be the ghost of Christopher Marlowe (Danny Webber).

Meanwhile, Jack Hooper (Eric Wheeler), a librarian who just might be a match for Samantha, has lost a prized manuscript to a mysterious thief.

And Gregory's roommate, Elspeth (Stephanie Altholz), is pursuing her own agenda.

It's all connected, but how?

The play, directed by Michael Stevenson, is blessed with fast-paced dialogue delivered with enough snap - particularly by Gularte - to make it sizzle. ('If someone had come along and written me Sonnet Number 53, for example, I would have jumped on him and wrapped my thighs around his neck.')

It's a huge role for Gularte, who is present in every scene. We've previously watched her in so many serious, meaty roles, that it's fun to see her in something really funny.

We're never quite sure what Marlowe is doing as Samantha's muse, but Webber is quite funny, particularly during his attempts to distract the professor as she tries to give a lecture.

Jones is perfect as the publicist, Lisa Minkman. She can't imagine what Samantha wishes to accomplish professionally, and instead sees only possibilities for how this Shakespeare tome could reach a broader audience if it's 'sexed up' a little, so it'll appeal to the Cosmo crowd.

Wheeler, last seen in 'The Complete History of America (Abridged),' is fine in a role that doesn't require so much frenetic energy. His part is smaller than the rest, but he gives a solid performance as a librarian who has discovered a rare document that might be the very thing that Lisa is seeking, to add a little oomph to Samantha's manuscript.

Altholz brings the rather odd Elspeth to life. On the surface, she's merely a love-stricken student ... but she turns out to possess a skill that becomes crucial to the plot.

Jonathan Williams constructed a good-looking and versatile set. Most of the show takes place in Samantha's office, and the strategic movement of a door changes the look of the room, and allows for a variety of meetings. The office bookshelves also are used well, to create the sense of a university library.

The 27-year-old Hardy reluctantly allowed herself to be called up on stage at the conclusion of the opening night performance; she was, unfortunately, decidedly uncomfortable. I hope she finds a way to become more at ease with well-earned accolades: Based on this play, she has many more such evenings in her future, if she maintains such a high level of work.
Posted by Bev Sykes at 4:40 PM