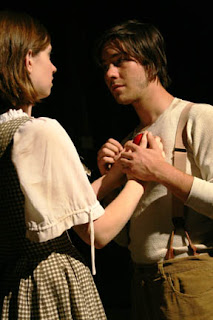 First we had the Brothers Grimm, whose fairy tales were certain to give nightmares to young children.

Now we have playwright Timm - Stephanie Timm by name - whose 'Picked' is this year's offering by Barnyard Theater, under the direction of Steven Schmidt.

Timm's story has the atmosphere of a retro fairy tale, but with updated language and situations that may push it into the PG rating. It's both old fashioned and as up to date as the popular 'Twilight' vampire series.

Three sisters - Iris (Maddy Ryen), Lily (Camille Beaumont) and Violet (Lindsay Carpenter) - live in 'a raped and pillaged land where wolves prowl the woods, and an endless war is all that anyone remembers.' Iris is 'the eldest and the prettiest.' Lily is 'the middle and the smartest'; she can figure out how to get pitchers down off high shelves, and she's really good at riddles.

Violet, 'the youngest and sweetest,' always helps spiders across streams, and puts out the flames when beggar women are on fire. She's therefore picked to marry a man who lives across the sea, and is expected to live happily ever after.

Iris and Lily continue to live on imaginary food, and long for the day when they, too, can leave the raped and pillaged land.

We watch Lily's coming of age, when she meets Wolf (Josh van Eyken), who awakens new feelings in her. Lily is intrigued, despite Iris' warning that wolves will drag her into the forest and make her belly swell with snakes. Wolf creates tension between Iris and Lily, but Lily also has a protector, Woodsboy (James Henderson), who brings her books and food.

All too soon, we learn that things are not what they appear, when Lily is told she will join Violet and marry her own man across the sea. The play turns quite dark - and grim - before the survivors ultimately live happily ever after.

This is a strange show, albeit well done by a crew of wonderful actors. I've watched Ryen's growth as an actress with pleasure, and she does not disappoint here. Beaumont brings an innocence and an underlying smoldering sexuality to her performance as Lily. Carpenter glows as Violet, particularly when she appears in apparitions, reading postcards she has sent home to her sisters.

Henderson is very earnest as Woodsboy, and he displays a range of emotions despite being unable to speak, due to his wooden lips.

As always, it's an adventure to watch a production in Schmeiser's Barn. The company is ready to spray patrons with mosquito repellent, and the barn goats occasionally add their voice at unexpected moments. And who needs a fog machine, when you can create a dust cloud in the dirt of the stage floor?

(My sympathies to whoever is responsible for keeping Violet's wedding gown looking white!)

All told, though, Barnyard Theater once again provides a delightful evening's entertainment.

The company's summer season will include an evening reading of short plays on Friday, July 24, and a performance of short one-acts on Saturday, July 25. If the quality of work displayed in 'Picked' is any indication, both those single-evening events will be worth investigating.
Posted by Bev Sykes at 5:56 PM