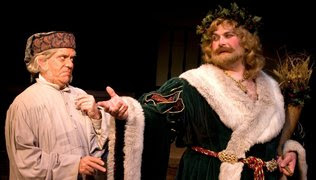 There are three suggestions I would offer to Sacramento Theater Company for improving its otherwise excellent production of 'A Christmas Carol.'

** Cut the fog by at least half. The stage was filled with fog so much of the time that it stuck around to make for foggy dinner-table scenes and foggy office scenes and, most frustratingly, made some characters completely disappear in billowing white fog during a dialog scene - to say nothing of choking nearby audience members.

** Turn down the thunder. The woman sitting next to me talked with her child through the whole first act. Because I glared at her, she apologized at intermission saying that her son couldn't hear what the actors were saying because the thunder was so loud.

** Make the vocal reverb a ghost of productions past. 'A Christmas Carol' has been delighting audiences for decades without giving an echo to the ghostly voices. It was particularly awful when Scrooge and Marley had a scene together and Marley's reverb somehow affected Scrooge's mic as well.

'A Christmas Carol' has been a beloved holiday classic for STC for a long time. There was no reason to go high-tech.

I would also suggest that in a production where 16 roles are double-cast there should be some sort of board indicating which actor is playing which particular role that night. This is especially gratifying to the parents of the younger actors, who would like their child to get the recognition he or she deserves.

All that said, however, the actual performances were quite good.

Matt Miller makes a wonderful Scrooge. I have seen him do the role before and I found touches in his characterization this time that I may not have noticed before. He kept Scrooge's arthritic hands all the way through and didn't forget in certain scenes. I was particularly impressed in scenes where all he had to do was to observe the action going on around him. Sometimes an actor can be more effective doing and saying nothing than to be the person speaking. Miller never lost the moment. It was impressive.

Jim Lane is a man of many parts, first as the ghost of Jacob Marley, where he was suitably scary (if difficult to understand through the echo), dragging his chains and giving dire warnings to Scrooge about his potential future. He shows up in several scenes in the ensemble, and finally is Old Joe, the broker who buys the deceased Scrooge's belongings from the staff who stole them on the death of the miser.

Maggie Hollinbeck is lovely and ephemeral as the ghost of Christmas Past, who proves that she, too, has a hard edge to her as Scrooge's memories turn painful. Hollinbeck later appears as Mrs. Cratchit.

The multitalented Michael R.J. Campbell also plays several roles, most notably the Ghost of Christmas Present - larger than life on his elevated throne. He appears again as the jolly Fezziwig, Scrooge's old employer who shows the Scrooge of today how to create a pleasant workplace. Once again, he is the current husband of Belle, the love of Scrooge's life.

The delicious Lucinda Hitchcock Cone is Mrs. Fezziwig, whom everyone (especially her husband) obviously adores. The actress returns later as Belle, the Matron.

Gillen Morrison is wonderfully noble and ebullient as Bob Cratchit, Scrooge's long- suffering clerk, who certainly has much to complain about, yet doesn't. This is the sort of role at which Morrison excels. He also plays the fiddler at Fezziwig's Christmas party.

Young Ebenezer is played either Hank Minnick or Dafydd Wynne (no indication of which child played the role), and gave a tender, sensitive performance. His duet with his sister Fan (either Elle Berti or Caitlyn Shannon) was lovely.

Special mention should be made of either Lauren Metzinger or Courtney Shannon as the Beggar Child. (I'm very sorry - for this night's performance - I can't give proper credit to the right child).

Kudos to director Michael Laun on giving us 'A Christmas Carol' with lots of heart - another wonderful holiday gift for the Sacramento area.
Posted by Bev Sykes at 3:26 PM